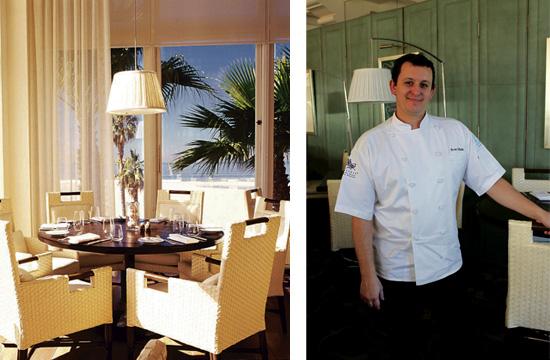 Mede, who now oversees all food and beverage concepts at Casa del Mar and Shutters on the Beach, has set out to emphasize the natural flavor profiles of simply prepared, market-fresh seafood dishes, complemented by both regional American and Mediterranean influences.

“The vision was to create this place where Pico meets the ocean where we have a group of restaurants that are a family of different venues with different dining experiences, from lounges to restaurants, where there is something for everybody,” Mede said. “At Catch, for example, we have intensified the menu a little bit more, putting the statement out there we are a seafood restaurant. We created an extensive line of different techniques and more seafood options.”

“We have some really simple dishes like steamed clams, steamed mussels, and simple things like grilled octopus that comes with potatoes and a little paprika and garlic,” he said. “Our entrees and large plates highlight different seafood techniques from a whole grilled Mediterranean branzino to our salt-baked Pacific Blue prawns.”

Mede joins the restaurant team with a seasoned career, including executive chef positions at Michael Mina’s American Fish and Nobhill Tavern in Las Vegas, as well as time spent as sous chef at Charlie Trotter’s in Chicago.

His resume further boasts culinary positions in the United Kingdom and Germany, as well as a nod for Star Chef’s “Rising Star Chef” award, and stints at several Michelin-starred and James Beard Award-winning restaurants.

Mede said he was familiar with the Santa Monica farmers markets before he even arrived in California.

“When I was working in Las Vegas I always had somebody come to Santa Monica to go to the farmers markets,” he said. “I’m familiar with many of the vendors, but it’s a lot different now that I’m actually meeting the people rather than just talking to them on the phone. We really try to show off the farmers markets produce on a weekly basis by constantly adding new items to the menu and staying in touch with the farmers to know what’s coming up and how we can incorporate different produce into the menu.”

The restaurant has also introduced a rotating roster of jazz and contemporary performances, held live every Sunday during brunch from 11:30 am to 2:30 pm. DJ Raul Campos will start his residency this Sunday, March 3.

Catch is located at 1910 Ocean Way, Santa Monica. Reservations, which are not required,  can be made by calling 310.581.7714 or visiting hotelcasadelmar.com.