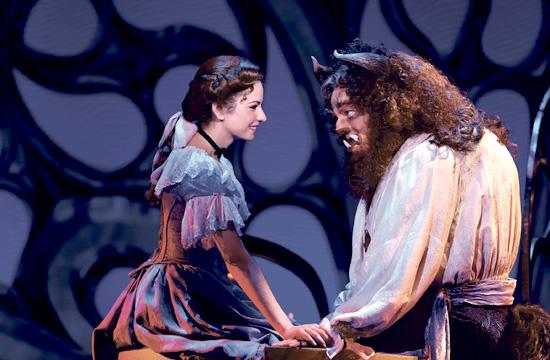 Disney’s “Beauty and the Beast” opened at the Pantages Theatre in Hollywood Tuesday night for a limited two week engagement through April 7.

The classic Disney story introduces the audience to Belle, a young woman in a provincial town, and the Beast, who is really a young prince trapped in a spell placed by an enchantress.

If the Beast can learn to love and be loved, the curse will end and he will be transformed to his former self.

But time is running out.

If the Beast does not learn his lesson soon, he and his household will be doomed for all eternity.

The original creators of the Broadway production are together again for this new touring production.

The play is directed by Rob Roth and choreographed by Matt West, with costume design by Ann Hould-Ward, lighting design by Natasha Katz, scenic design by Stanley A. Meyer, sound design by John Petrafesa Jr., and music supervision by Michael Kosarin.

Roth said he was thrilled for the engagement at Pantages.

“It has been wonderful to bring the entire original design team back together to work on this new production of Beauty and the Beast,” Roth said. “As a director, it is rare to have the opportunity to revisit your work 15 years later. Hopefully I’ve grown and developed as an artist, along with my collaborators, and we can bring 15 years of experience to this new production.”

Roth said the original production team has remained close as a team over the years of producing the show around the world.

“It has been so much fun getting together to re-explore and re-invent the show,” he said. “The theme of ‘Beauty’ is about seeing past the exterior into the heart of someone, and this is reflected in the design for the show, which is about transparency and layers, seeing past one thing and into another.”

Disney’s “Beauty and the Beast” has become an international sensation that has played to more than 35 million people worldwide in 21 countries.

It has a running time of two hours and 10 minutes plus intermission and is recommended for all ages. (Note children younger than three years old will not be admitted into the theatre).

The Pantages Theatre is located at 6233 Hollywood Boulevard, just east of Vine Street in Hollywood, and the box office opens daily at 10 am except for holidays.

Tickets may also be purchased online at www.HollywoodPantages.com or www.Ticketmaster.com or by phone at 800.982.2787.