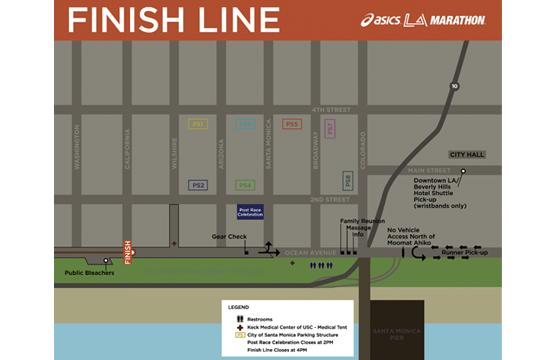 As one of the largest organized road races in the country, the LA Marathon returns this Sunday with about 24,000 runners expected to take part in the scenic “Stadium to the Sea” course.

Participants will start at Dodger Stadium and wind their way west past major landmarks before completing the race on Ocean Avenue in Santa Monica.

Atmosphere is a big part of the event and a handful of bands will make the day one to remember.

There are three bands scheduled for the Santa Monica leg of the race.

This is the ninth year in a row that Core has volunteered its talents to inspire marathon runners and entertain spectators with its music.

The seven member male band’s mission is to give back to the community in which they live, playing their music for worthy causes and events.

With a mix of familiar classic rock covers to thought-provoking originals, Core appeal to a wide audience.

Spectators are encouraged to cheer the runners as they take their final steps toward the finish line at California and Ocean Avenue (there will not be spectator access to Ocean Avenue south of California Avenue).

Spectators are then invited to join runners in a post-race celebration in true St. Patrick’s Day form, at the Michelob Ultra Beer Garden, which will be on Santa Monica Boulevard between Ocean Avenue and 2nd Street.

The Family Reunion Area is located on Ocean Avenue between Broadway Avenue and Colorado Avenue. Runners are encouraged to make arrangements to meet their family at one of the letters of the alphabet along Ocean Avenue.

The Runner Pick-Up Zone is located on Ocean Avenue between Moomat Ahiko Way and Pico Boulevard.

Vehicles can access the Runner Pick-Up Zone from the east via Pico Blvd or from the south via Ocean Boulevard (vehicle access is not allowed north of Moomat Ahiko Way on Ocean Blvd).

• As is the case with most large-scale marathons, the LA Marathon is as much about giving as it is running and since it’s inception it has raised more than $20 million for various charities throughout the community.

• Boxing great Muhammad Ali served as the honorary race starter for several years between 1989 and 2004.

• 1984 Olympian Joan Benoit Samuelson still holds the record for the fastest women’s marathon ever run in Los Angeles (2:24:51) which she accomplished during her gold medal winning performance.

• The most decorated performer in LA Marathon history is Mexican Saul Mendoza who has won the Wheelchair Division seven times.

• The LA Marathon Expo, staged at Dodger Stadium on the Friday and Saturday before marathon day, is one of the largest road racing expositions in the world.