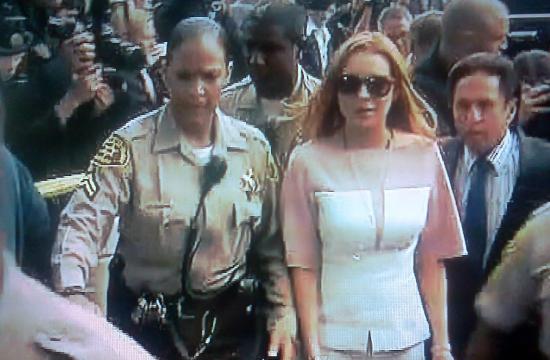 Lindsay Lohan may have to serve 245 days in prison if she is convicted of lying to Santa Monica police following her June 2012 crash on the Pacific Coast Highway.

Lohan’s trial was scheduled to begin 8:30 am Monday morning, but she arrived late at 9:18 am.

According to reports, Lohan failed to fly from New York to Los Angeles Sunday after she felt the plane was having mechanical problems. She boarded a private jet in New York early Monday morning.

The Santa Monica City Attorney’s Office charged Lohan on Nov. 29, 2012 with willfully resisting, obstructing or delaying an officer, providing false information to an officer, and reckless driving relating to an accident on the Pacific Coast Highway on June 8, 2012.

Lohan claimed she was not driving a Porsche that rear-ended a truck, but a Santa Monica Police Department investigation states otherwise.

Lohan previously pleaded not guilty to the charges through her then-lawyer Shawn Holley on Jan. 15, 2013.

It is reported that she will serve 245 days in prison if convicted — the remainder of her suspended sentence in the shoplifting case.