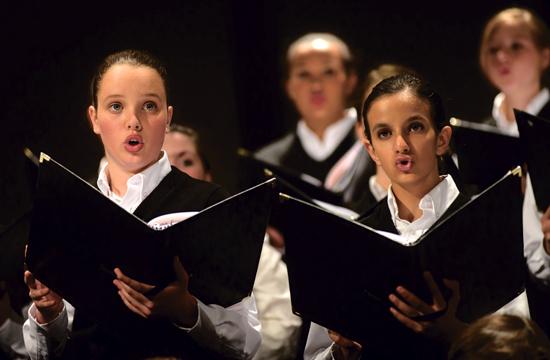 The National Children’s Chorus will celebrate Ireland tonight to a sold-out audience at The Broad Stage in Santa Monica with its Celtic Soul performance.

As America’s leading youth choral institution, the ensemble will perform the West Coast premiere of “Out of the Mist, Above the Real,” an Irish cantata by noted composer Dr. Daniel Brewbaker.

The cantata’s title is derived from the second movement, “The Irish Cliffs of Moher,” a poem by Wallace Stevens whose image on a postcard inspired Stevens to write about the “worn cliffs towering up over the Atlantic.”

“It was a great gust of freedom, a return to the spacious, solitary world in which we used to exist…” Stevens believed that the imagination is allowed freer play in Ireland.

The cantata and the poems on which it is based express a search for ancient origins, a passionate yearning to find the most distant, primal, earthly and heavenly progenitor of existence.

“Out of the Mist, Above the Real” was commissioned by the Choral Music Experience New Millennium Institute in Maynooth, Ireland and premiered at the National Concert Hall in Dublin in 2002, with combined youth and mixed choruses, The Irish Chamber Orchestra, uilleann piper Joe McKenna and soprano Noirin Ni Riain.

With a set of ensembles in Los Angeles and New York, the chorus trains students from more than 60 schools in each city who meet weekly for rehearsal and musicianship study.

In residence at The Broad Stage in Santa Monica, the chorus is one of a few youth arts organizations in the world to have its entire concert season presented by a professional concert hall.

This is the fourth season at The Broad Stage and the second in New York. The 2012/2013 season is entitled “Traditions,” presenting an eclectic array of musical styles, drawing on American cultural roots.

Each child, regardless of educational or financial background, has the possible opportunity to develop vocal skills from the most basic concepts through the college level.

Expert instructors work to cultivate tone quality, breath support and musical expression in each student while collaborating as an ensemble culminates in world-class performances at The Broad Stage in Santa Monica, St. Paul the Apostle Church in West Los Angeles, and The Church of St. Paul the Apostle in New York.

A pianist, conductor and voice coach, McEndarfer has been artistic director since 2004 and is integral to all facets of the chorus’ development from spearheading auditions and vocal training, to choosing material, to fostering relationships and securing collaborations with artists and organizations.

Though the performance is sold out, tickets may be available via waitlist by calling The Broad Stage box office at 310.434.3200.