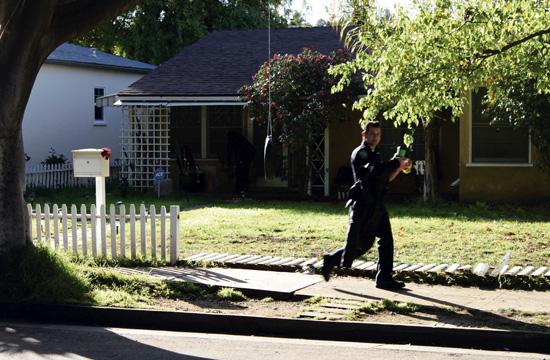 Neighbors of John Carroll Lowery shook their heads with astonishment as the body of their 48-year-old friend was wheeled into the back of a LA County Coroner’s van in the 2900 block of Delaware Avenue at about 8:30 am Wednesday.

Just hours earlier, Lowery shot himself in the head after several tense hours of holding his 86-year-old mother-in-law hostage, who also lived in the home.

Lowery’s son escaped from the single story home and dialed 911 just before 5 pm Tuesday, telling the operator he and his grandmother had been tied up and taken hostage at gunpoint by his father.

As the sun began to set, he said crisis negotiators began to communicate with Lowery who was still holed up with his mother-in-law.

“We started to communicate with the guy who was clearly depressed, despondent, and suicidal,” Lewis said. “Based on the conversations, he was depressed and despondent over his relationship and issues with his wife.”

Lowery’s estranged wife who he still lived with wasn’t at home during the incident.

The SMPD’s SWAT team and crisis negotiators were assisted by members of the Beverly Hills Police Department and the Santa Monica Fire Department.

Lowery allowed crisis negotiators to speak with his mother-in-law early into the hostage situation – she was able to tell officers she was not injured, Lewis said.

“At one point she was tied up and couldn’t walk out the house,” Lewis said. “Within a couple of hours, he had untied her and the next time we talked to her she said ‘yes, she could walk out.’ Then within a few minutes they were able to get her to walk on out.”

With the mother-in-law out of harm’s way at about 10 pm, police negotiators continued to communicate with Lowery.

At about midnight, he went quiet.

Lewis said the SWAT team employed several different tactics to get his attention.

“When that failed, they deployed gas into the house to see if he would come outside,” he said.

When that option didn’t work, the SWAT team made entry at about 4 am and located Lowery in one of the bedrooms.

He was found dead with a self-inflicted gunshot wound to his head.

Neighbor Terell Jolivitte has lived next door for 46 years.

She said she grew up with John’s wife Wendy, who was also born and raised in their side-by-side homes, adding the couple married after high school and he moved into the home about 16 years ago.

Jolivitte said she never thought he was capable of killing himself.

“He would come over and talk to me every day about marital problems and he had a few problems of his own,” she said. “Never in my whole life did I think he would do something like this.”

Jolivitte said she talked to him Tuesday afternoon at about 2 pm or 3 pm – just hours before the hostage situation began – and she said he appeared to be acting normal.

“Earlier in the day at about 9 am he was supposed to fix a friend’s motorcycle, and the guy had already paid him $22 or something,” she said. “The guy was outside their house and said ‘forget it, I want my money back.’ That’s when Wendy came out and gave the money back, that’s when they started arguing, there was a big fight over that. They went back into the house and I thought everything was okay.”

Jolivitte said John experienced a brain aneurism two years ago and had also turned to drugs. She said he was also out of a job.

“You never know what’s going on behind closed doors, but I’ve never heard anything,” she said. “I don’t know what triggered John, I wish I could have talked to him before he did something like this.”