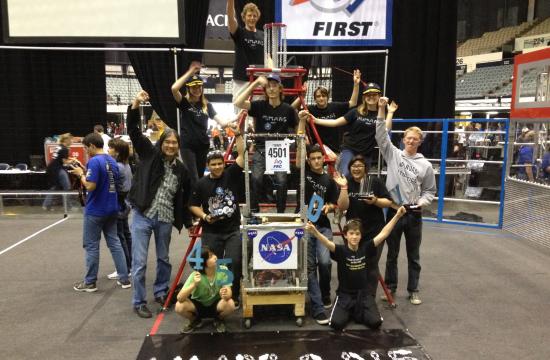 New Roads School’s robotics team has won the prestigious “Rookie All Star Award” this past weekend, earning them a coveted spot at the FIRST (For Inspiration and Recognition of Science and Technology) Robotics Competition (FRC) World Championship.

Held at the Long Beach Arena on March 22 and 23, Team 4501 competed to earn one of several spots at the FIRST Championship held April 24-27 in St. Louis, MO.

With the hope of winning one of the several coveted awards, high school students worked with professional mentors to design and build a robot over a six week period that solved a problem using a kit of parts and a standard set of rules.

This year’s game, “Ultimate Ascent,” had robots participating in a Frisbee style game where teams pick up and shoot Frisbees through various narrow goals and then climb a 10-foot steel pyramid.

Beneath the fascinating idea of high school kids designing, machining, and programming 150-pound robots, there is an undercurrent of a culture shift that has teenagers thinking about how to make a positive and lasting impact in their communities.

One award that focuses on this aspect is the Rookie All Star Award, which celebrates the rookie team that exemplifies a young but strong partnership effort, as well as one who implements the mission of FIRST: To inspire students to learn more about science and technology.

As a rookie robotics team mentor, Bryan Smith is not only proud of his team’s accomplishment but impressed with the lessons learned throughout the season.

“Other than the obvious of learning to design, build, and program a robot, we learned that when we work together we can accomplish more than we can apart,” Smith said. “We also learned that making teamwork a habit can lead to unexpected and tremendous results.”

The “Humans” unique approach to their team stems from their learning environment at the New Roads School in Los Angeles. The team’s motto is, “More than the Sum of Our Parts”, emphasizes their commitment to their team and their community.

New Road’s Head of School David Bryan believes the focus with which his students approach FRC is a clear indication that education needs more of this type of activity.

“Could one ask for better curriculum and pedagogy?” Bryan said. “Rich and complex understanding embedded in an activity that is challenging and oh so engaging. It’s what everyone in education hopes for.”

Sophomore and robot driver Jackson Spargur is amazed at his team’s achievement and opportunity to move on to the FIRST Robotics World Championship.

“I never entertained the wildest hope of us being as successful as we were in the LA regional, and I’m greatly excited to have the chance to compete in the St. Louis,” Spargur said.

Despite their victory, the “Humans” do not have an easy road ahead of them. They have just a few short weeks to raise over $15,000 in order to transport themselves, and their robot, to competition in St. Louis.

Donations will be greatly appreciated, and information about fundraisers and donation drives will be posted on the team’s website at http://blogs.newroads.org/robotics.