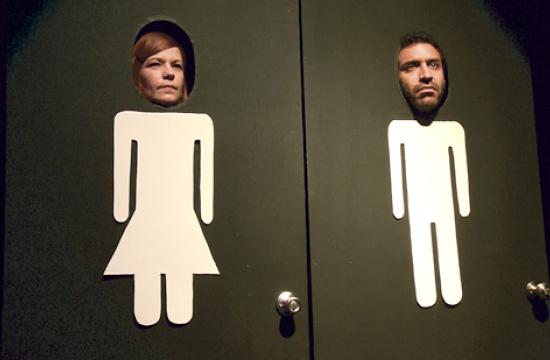 The Promenade Playhouse is current halfway through its run of “Plays In The Park” – a show containing an eclectic mixture of short plays, Shakespeare, and songs that runs through March 23.

The play is written and directed by Brian Connors, who presented the show in 2012.

While the production is similar to last year, it is an entirely different evening of theater.

Connors said the Playhouse’s artistic director saw last year’s production and asked him if he would bring the plays back to the theater this year with her company of actors.

“Last year we did staged readings as that cast had a number of stars who were only available for a weekend or two, as in the case of Ed Asner and George Segal,” Connors said. “Also, the cast last year was much older, some of the gentlemen were in their 80s.”

He said this year’s shows were fully rehearsed performances.

“Natalia Lazarus’ company is composed of a young, International cast of actors, and students from Paris, Tehran, and Brazil,” he said. “The current production at The Promenade Playhouse has some of the same short plays, ‘Swans,’ ‘Oxymorons’ but also some new short plays such as ‘He & She.’ Also, in order to utilize the entire company’s talents, I incorporated some Shakespeare monologues, sonnets and some songs too.

‘Swans’ is a light comedy about a young artistic couple, who are at the brink of breaking up… or getting married. Suzanne is a Rockette and she’s had an exciting career as a dancer, but now she wants to get married and have a baby. Her lover, Bill, is an artist/painter and he’s worried that getting married, having a child, and outside pressure from “butinski” in-laws will devour and destroy his creativity, not to mention his finances.

‘Oxymorons’ crashes into the crazy, mixed up, competitive, sibling rivalry between two brothers. Joey has led a wild, self-indulgent life filled with women and money, but now his financial tide has turned for the worst. His brother J has led a much more mellow and modest life style. J comes to the park zoo to console Joey who is there watching the neurotic polar bear pace back and forth. But who is really going crazy? The bear or the brothers?

Connors said it was an honor, privilege, and a lot of fun to work with the star cast in 2012.

He said he wasn’t sure what it would be like to work with a young, international cast of actors this year whom he did not know, but said he said everything had come together perfectly.

“It’s been a wonderful experience,” he said. “These are charming, bright, attractive, talented, hard working, and aspiring artists. There have been challenges and obstacles. Young actors are waiting tables etcetera and stuff happens, but overall, it’s been a joy and a delight.”

Connors said he was also pleased to report that one of his 2012 short plays turned into a short film which he wrote and directed called “Good Men,” which starred Ed Asner and Mark Rydell.

“It has and continues to be screened in film festivals all over the country,” he said. “See the schedule and trailer on goodmenmovie.com.”

Plays in the Park will run through March 23 on Saturdays at 8 pm and Sundays at 7pm. The show is approximately 120 minutes with intermission.

General tickets are $20; $5 discount for seniors and students.