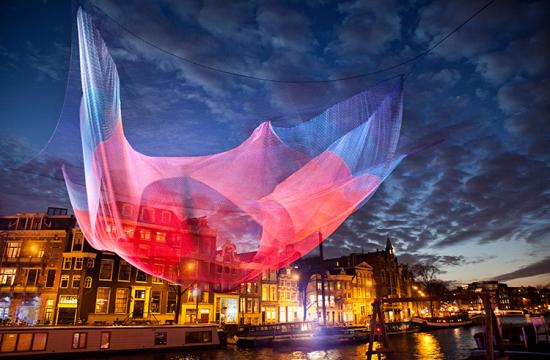 Keynote artist Janet Echelman will be in Santa Monica this morning to explore the beach near Bay Street in preparation for installing one of her signature monumental sculptures that will be featured at Glow 2013.

Named Architectural Digest’s 2012 Innovator for “changing the very essence of urban spaces,” Echelman has gained international recognition for building living, breathing sculptural environments that respond to the forces of nature—wind, water and light, and become inviting focal points for civic life and on September 28, 2013, she will transform a portion of Santa Monica Beach.

While on a Fulbright lectureship in India, Echelman began wondering if nets could be a new approach to sculpture: a way to create volumetric form without heavy, solid materials and is inspired to explore the potential of unlikely materials, from fishing net to atomized water particles, combining ancient craft with cutting-edge technology to create sculpture at the scale of buildings.

The overarching intent of the evening is to break through the public’s preconceived notion of what art can be, encouraging both thoughtful contemplation and energetic participation.

While museums and galleries sleep, Glow comes alive to engage artists in the production of new artworks, specially commissioned for this unusual set of time and space coordinates: the beach at night.

Glow offers a rare and remarkable opportunity for the public to connect with contemporary art in new ways and to rediscover familiar spaces through the eyes of artists.

This year Glow will offer an extraordinary array of thought-provoking site-specific installations and performance works by dozens of artists from Los Angeles and around the world.

The art will be displayed in unexpected contexts and relationships, using both built and natural environments, on and near the quintessential Southern California public space: the beach.