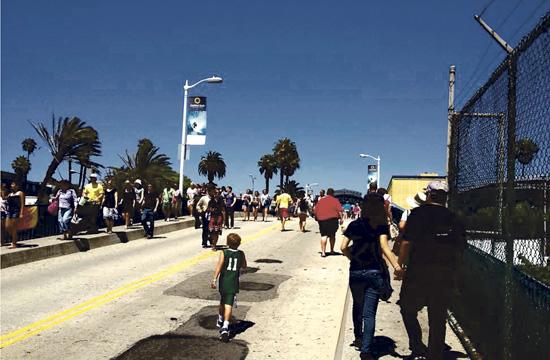 Council members approved the contract modification last Tuesday after City staff reported to the dais that the Santa Monica Police Department was concerned about pedestrian and vehicular traffic on the pier’s bridge during construction.

“Police Department staff has expressed concern about the potential conflict between vehicles and pedestrians on the pier bridge since the narrow sidewalks are inadequate for the large volume of pedestrians traversing the bridge,” City staff stated. “Staff has identified interim modifications to the bridge’s sidewalks which would improve safety until a new bridge is constructed.”

Construction on the new pier bridge is expected to begin in 2016 and would last for 18 months, according to City staff.

The original contract between City Hall and Meek Shea, Joint Venture, was approved by the council in January and called for the “demolition and reconstruction of a 360-foot long by 36-foot wide section of the Municipal Pier from the high tide line to the westerly concrete pier constructed in the late 1980s.”

According to City Hall, the pier bridge was built in 1939.

“The bridge has very narrow sidewalks and tall curbs and the height of the handrail above the walking surface is less than the height required by current standards. The sidewalks on the bridge are inadequate to accommodate the volume of pedestrians traveling to and from the Pier. Pedestrians often walk in the adjacent vehicle lanes,” City staff stated. “For this reason, the Police Department is concerned about the potential conflict between pedestrians and vehicles in the event a driver was to lose control of a vehicle.”

“To improve pedestrian safety until a new bridge is built, staff recommends removing the sidewalks on the bridge, shifting vehicle lanes to the south side and providing a wider pedestrian walkway on the north side of the bridge,” City staff stated.

A concrete barrier separating vehicular traffic from a pedestrian walkway would also be added.

Meek Shea, Joint Venture, was the only bidder for the pier replacement project.

According to City staff, it was more efficient to modify the original contract with Meek Shea, Joint Venture, and have them oversee the interim safety improvements, as opposed to seeking new vendors for the project.

Previously, City staff had told Council members the pier bridge in its current condition is at the end of its useful life. According to plans, the new pier is anticipated to be to be wider and brought to current seismic standards.

The Municipal Pier originally opened in September 1909. A second, shorter pier was built seven years later. It would take another 23 years to build the pier bridge.