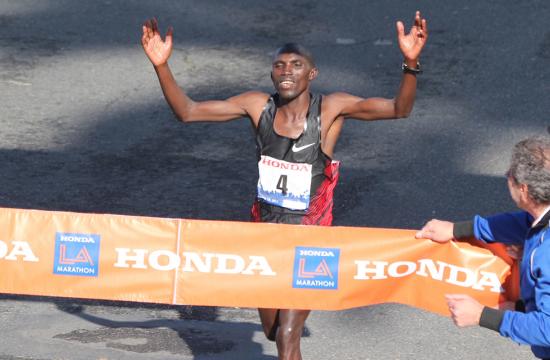 The LA Marathon’s “Stadium to the Sea” course will enter Santa Monica this Sunday, March 17 on San Vicente Boulevard at 26th Street, then turns south at Ocean Avenue to the finish line at Ocean and California.

All of San Vicente Boulevard in Santa Monica and Ocean Avenue from San Vicente to Colorado Avenue will be closed beginning at 5 am on March 17.

Streets will re-open in the afternoon at the discretion of the Santa Monica Police Department, with San Vicente expected to be completely re-open by 7 pm Ocean Avenue near the finish line may not re-open until approximately 9 pm.

Street closures on Saturday, March 16: Eastbound Wilshire Blvd between 2nd Street and Ocean Avenue will be closed at 3 pm.

— Ocean Ave. between Washington and Wilshire (the finish line area) will be closed at midnight on March 17th.

— Main Street from Pico Blvd to Colorado Avenue and Olympic Drive from 4th to Main Street will be closed at 1 am (for runner shuttles).

— Ocean Avenue will be closed to all vehicle travel between San Vicente Boulevard and Colorado Avenue. Northbound and southbound traffic will be allowed on Ocean Avenue from Pico to Colorado. The Moomat Ahiko ramp to and from PCH will be open in both directions.

— Other downtown Santa Monica street closures: Southbound 2nd Street from Wilshire to Colorado will be closed.

— Northbound 4th Street from Colorado to Broadway is closed to traffic in the am only and will reopen at approximately noon.

— Colorado from 4th to 5th Street is closed.

— Westbound Wilshire at 4th Street will be closed (local access only).

— Colorado from Ocean Ave to 2nd Street will be closed (local access only).

— The California Incline will also be closed.

For live updates on street closures and re-openings throughout the day on March 17, visit www.smgov.net/lamarathon, twitter @santamonicacity, watch CityTV cable channel 16 or tune in to Santa Monica’s traffic radio station KRSM 1680AM.