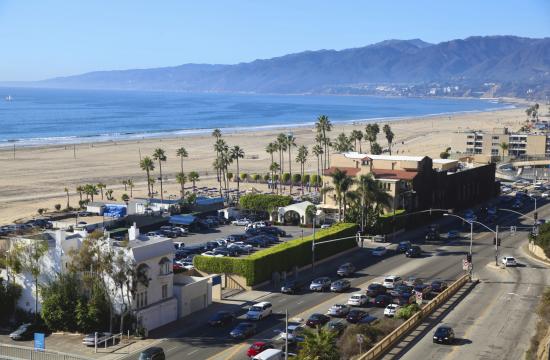 The City of Santa Monica has been awarded $1 million after being named one of the five winners in the Bloomberg Philanthropies’ Mayors Challenge.

The Challenge is a competition to inspire American cities to generate innovative ideas that solve major challenges and improve city life – and that ultimately can be shared with other cities to improve the well-being of the nation.

Santa Monica received the innovation prize to implement its idea to become the first City in the US to measure wellbeing at the local level, and use that information to drive the City’s decision-making process in order to address critical wellbeing gaps in the community.

Santa Monica was selected as a Mayors Challenge winner out of a pool of over 300 applicant cities, based on four criteria: vision, ability to implement, potential for impact, and potential for replication.

Santa Monica will also receive a sculpture created by world-renowned designer Olafur Eliasson to commemorate each of the Mayors Challenge winners.

“We are thrilled beyond belief to be one of the winners,” O’Connor said. “Now that the door is open to implementing the big idea we’ve been thinking and talking about for months, I can’t wait to get started. Our Local Wellbeing Index is going to be a game-changer, not just for Santa Monica, but for cities across the country and beyond.”

Michael R. Bloomberg, philanthropist and Mayor of New York City, said economists and governments around the world are increasingly looking for metrics to understand just how well their cities — and citizens — are doing.

“Santa Monica can be a real pioneer in this effort, and Bloomberg Philanthropies is eager to see Mayor O’Connor’s idea become a model for the country,” Bloomberg said.

Santa Monica will team with top national and international researchers to create a Local Wellbeing Index.

This diagnostic tool will provide a multidimensional picture of the state of wellbeing in the community by quantifying variables related to key drivers of wellbeing, including economics, education, health, social connectedness, and physical environment.

When applied, the Local Wellbeing Index will guide City staff in its policy setting, decision making, and resource allocation processes in order to ensure that tax dollars are being spent effectively and efficiently to create the conditions needed for people to thrive.

The Mayors Challenge is a competition to inspire American cities to generate innovative ideas that solve major challenges and improve city life.

Mayors of U.S. cities with 30,000 residents or more were eligible to compete, with 305 cities representing 45 states submitting applications last September.

Providence was awarded the $5 million grand prize, while Chicago, Houston, and Philadelphia were also awarded $1 million prizes. To learn more about the Mayors Challenge, visit bloomberg.org/mayorschallenge.

The Mayors Challenge is the latest initiative of Bloomberg Philanthropies’ Mayors Project, which aims to spread proven and promising ideas among cities. Other Mayors Project investments include Cities of Service, Innovation Delivery Teams, and Financial Empowerment Centers.