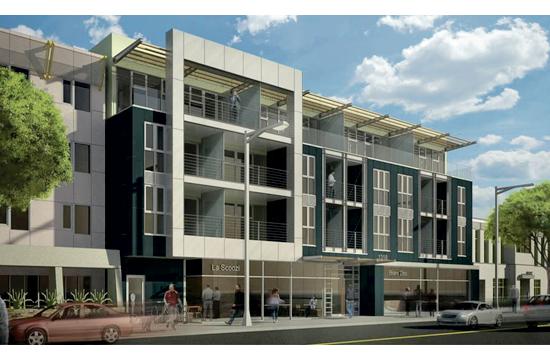 By one commissioner’s count, the Santa Monica Planning Commission has only considered three development agreements (DAs) this year. When commissioners met March 20, they considered their first DA in “weeks.” As if seeking to establish a trend of slowing down the DA approval process, commissioners last week took a time out from deliberating a mixed-use development at 1318 Second Street, tabling the remainder of their discussion until April 3.

Under the currently proposed DA, the developer is pitching a four-story building with 53 units, including 28 studios, 19 one-bedrooms, and six two-bedrooms.

The project would be 15,000 square feet with a two-level, 66-space subterranean garage. The structure would be 45 feet high and include 6,717 square feet of ground floor commercial space, according to City staff.

City staff pointed out several community benefits had been negotiated to compensate for the proposed project to build above the height restriction. According to Santa Monica’s zoning laws, no building can be built higher than 32 feet unless the developer is willing to make certain concessions to the City.

The developer has agreed to provide eight affordable units on-site, or three more than the minimum required by the City.

Roof-mounted photovoltaic solar panels must be installed, while the building’s design and construction must meet or exceed a LEED Gold certification.

A Transportation Demand Management (TDM) plan with measures applicable to both the commercial and residential components of the project must also be part of the project, City staff added.

The developer must also have a local hiring provision during construction and for commercial employees.

Finally, the project must include a provision for five electric vehicle “stub-outs for charging stations” within the subterranean garage.

Though the discussion is not yet complete, Planning Commissioners are or will be considering the several issues.

For example, City staff requested commissioners consider “whether the proposed design and site plan are appropriate and compatible with the neighborhood and the subject site” and “whether the proposed plan and proposed community benefits are consistent with the objective, goals, general land uses, and programs specified in the LUCE.”

Commissioners will also be deciding whether to recommend the DA be forwarded to the city council for its review and potential approval.

According to City staff, “the building design is modern/contemporary.”

Planning Commissioners will resume their discussion on this DA at the April 3 meeting. The Mirror will provide follow-up coverage of what happens at the meeting.