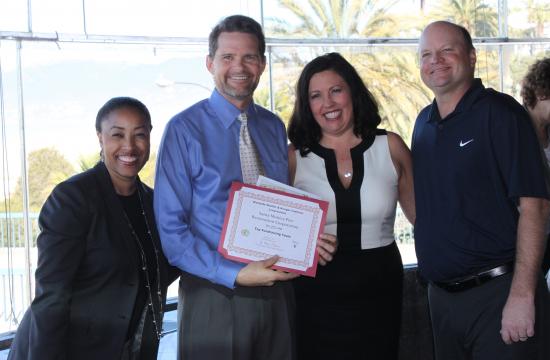 On Feb. 1, 124 teams comprising of a total of 620 bowlers converged at the bowling alley between 11 am and 9 pm all in the name of raising funds for the WSHC.

This bowling marathon brought the private and public sectors together with local social service agencies to raise funds for the eradication  of homelessness on the Westside of Los Angeles.

The event netted about $30,000 through sponsorships, pledges, team registration fees, and door prizes – this amount exceeded last year’s net by about $5000.

WSHC is an alliance of more than 30 organizations, public entities, and faith communities committed to ending hunger and homelessness through service coordination, public education, and advocacy.

The SuperBowl-A-Thon perpetual trophy, which begun in 2007 for the Hospitality session, was awarded to Locanda del Lago. Captain (and general manager of the restaurant) Megan Sheehy accepted the award for her team who set the highest score of the day — 792.

The highest individual score of the event was Tony Rodriguez of CapitalSource Bank with a score of 225.

Team photographs from the event can be found on the Facebook SuperBowl-A-Thon page, which will soon appear on the WSHC website as well at westsideshelter.org.