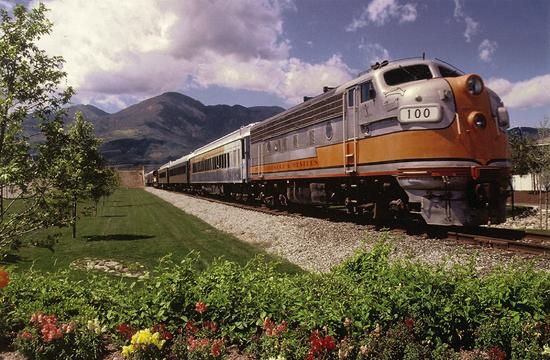 Transport back in time to the 1930s just an hour northeast from Santa Monica on board a vintage passenger train that travels through century old citrus and avocado groves in the beautiful Heritage Valley.

Fillmore & Western Railway Co. has been running weekend scenic excursions between Fillmore and Santa Paula for the past 17 years.

Departing at noon most Saturdays (and select Sundays during summer), the train travels west towards downtown Santa Paula.

Once the train stops after a leisurely one-hour journey, passengers can visit a handful of historic sites all within walking distance.

There are three “historic” museums within one block of the 1887 Southern Pacific Depot, the only one that is still in its original location along the branch line.

The California Oil Museum is a Queen Anne structure built as the original home of Union Oil in the 1880s by the founding fathers of the community.

There are many hands-on activities that school age children can do to learn about oil exploration and how it affected the growth of the community. The Oil Museum also has traveling exhibits and has featured “Italian Motorcycles” and a mock up space shuttle command center provided by NASA, just to name a few.

Directly behind the Oil Museum is the Santa Paula Art Museum.

The newest museum, which opened in 2012, is the Ventura County Agriculture Museum.  It is a treasure of antique farm equipment and the history of what the original revenue generators were in the city at its inception – agriculture and oil.

It features a unique gift shop called the Best of VC Marketplace featuring only products made in Ventura County.

In the downtown district, the Santa Paula murals are brilliant depictions of early life in the valley painted by world-class muralists.

Passengers and visitors to the Heritage Valley Tourism Bureau and the Santa Paula Chamber of Commerce are presented with a self-guided walking tour of the six-block circle of murals.

Kathleen McCreary, of Fillmore & Western Railway Co., said the train tours have been running since the current owners bought the business in 1996.

“I believe what makes the weekend scenic tours so unique, and the entire railroad for that matter, is its location,” McCreary said. “City and urban dwellers are amazed that in less than an hour they can be in the middle of a verdant agricultural valley, far removed from the hustle and bustle of the cement and asphalt that is their everyday plight.”

She said passengers enjoyed the leisurely pace as the train traveled along the vintage railroad preserved from the 1930s and 40s.

“Passengers are challenged to identify the multitude of row crops, fruit, and citrus trees, nursery stock and marvel at the actual valley geography,” she said. “There are two distinct mountain ranges on either side of the Santa Clara River that flows from east of Interstate 5 in Santa Clarita to the Pacific Ocean in Ventura. The train ride is slow and leisurely and provides great bonding time for families and rail enthusiasts alike.”

The second and last stop on the weekend scenic tour is at the Loose Caboose Garden Center and Gift Emporium.

The establishment is an historic one and sits alongside a true treasured home listed on the “Historic Homes Registry.”

The distinctive red barn-like building with bright white trim is an eclectic mix of items you would find in a general store.

The train stops right in the middle of the six-acre parcel as it unloads passengers to browse and shop.

Among the huge variety of items for sale are antiques from the historic home next door, a fresh produce stand out front, with locally grown fruits, vegetables, and nuts.

The interior of the “barn” is sectioned to feature many varieties of local Bennett’s Honey, jams and jellies, salsas, chutneys, and jerky – all locally grown and packaged.

The railroad took over ownership of the establishment about four years ago and has steadily built the inventory, installed a windmill and water tower, which pumps water into the steam train tender when it makes a stop.

The weekend scenic tours come to an end at about 4 pm back in Fillmore.

Fillmore & Western has more than 65 pieces of “rolling stock,” the industry term for all railcars, dining cars, flat cars, freight cars, etc and about seven locomotives, two of them diesel.

The railroad is known as the “go-to” place for the film industry looking to use a train or tracks in a feature film, television series, or commercial.

Thus, the moniker “Home of the Movie Trains” has been used since the current owners took ownership.

More than 400 movies, television series, commercials, and still shots have been filmed along the 32-mile long stretch that is leased from the Ventura County Transportation Commission.

McCreary said the train brings approximately 50,000 to 70,000 passengers a year to the small town of Fillmore.

“The train provides seasonal events that attract thousand of people to come ride the train and participate in the festivals that accompany them,” she said.

One of those seasonal events is “Railfest 2013.” The Santa Clara River Valley Railroad Historical Society presents the annual event on March 23-24.

It will include one-hour steam train rides on the Saturday at 10 am, 11:30 am, and 1:30 pm. On Sunday, there will be a diesel train ride at 1 pm. There will also be music, food, vintage automobile displays, speeder rides, arts and crafts, and more.