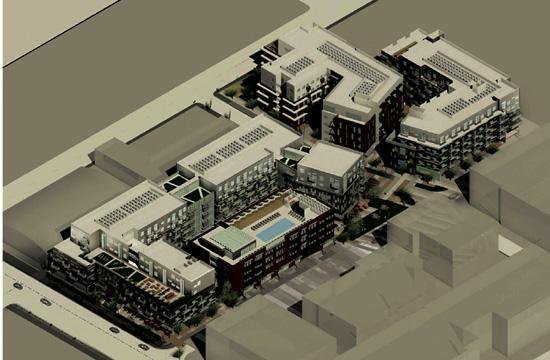 When 2012 ended, Village Trailer Park (VTP) was on the ropes as a split City Council narrowly voted to put the project on hold following several questions surrounding affordable housing.

A split council again decided the fate of VTP on Tuesday night, except this time a bare majority voted in favor of the multi-use project going forward. The 4-3 vote gives VTP new life again.

If the project can clear its second reading in April, VTP owner Marc Luzzatto will be able to move forward with his plans to build a 377-unit mixed-use housing development called “East Village.” The multi-use development would come at the expense of one of Santa Monica’s oldest communities.

What were those concessions?

For starters, 10 trailers would be allowed to remain as part of the new development but could potentially be shut down within a decade. These 10 trailers may also be developed as a multi-unit project.

While Davis believed Luzzatto’s concessions were satisfactory, Council members Kevin McKeown, Tony Vazquez, and Ted Winterer all voted against the project because they believed more affordable housing concessions were necessary.

Also, the development agreement (DA) stipulated that at least 41 units must be set-aside for very low-income residents.

McKeown said the current iteration of the VTP development might actually offer fewer affordable housing units than in December.

“I feel that since this is the first project of significance that we are looking at (for the Bergamot Area), it’s just not quite good enough,” he said. “I have some concerns about it not meeting the (Bergamot Area) Plan’s goals. We went into this trying to get greater affordability levels and I’m not persuaded that what we have before us is better than what was before us previously. It’s arguable worse.”

Beyond the affordable housing issue, Luzzatto also agreed to make all 377 units as apartments; under the previous proposal, 216 units were planned as condominiums.

Also, the development may include more parking spaces than previously proposed, with some of those spaces available to non-tenants.

Davis was happy the development has shifted to an all-rental property to help make it more affordable and accessible.

The project currently proposes three buildings, compared to four in earlier iterations. Just the same, the development has become more residential, with just the first level of buildings potentially dedicated to other uses. Both of these evolutions, Davis said, would help limit the amount of traffic the development produces.

One point council members and Luzzatto could not yet come to terms with: a structured local hiring deal.

Coincidentally, VTP was also part of the council’s closed session agenda, as Luzzatto had filed a lawsuit against City Hall in January in light of the council’s decision last December to rescind in second reading its approval of the “East Village” project.

At the first-ever meeting of the current council, a pair of 4-3 votes allowed City Hall to withhold enforcing a previously approved DA, effectively allowing the panel to have more time to scrutinize the proposed 377-unit multi-use development.

Back then McKeown said the intent was not to preclude any developments from being built at VTP but rather to address specific issues and concerns, such as possible deficiencies in affordable housing and whether or not City Hall is following its own laws.

Based upon their respective votes, McKeown, Vazquez, and Winterer believe some of those deficiencies were not satisfactorily addressed.

In November 2012, the previous City Council finally green-lighted the mixed-use housing project helmed by Luzzatto after two days of deliberation and discussion. The two days of deliberation and discussion capped off a six-year battle that drew the ire of those who would either be displaced by the elimination of VTP or adversely affected by potential impacts of a new development such as increased traffic.

Prior to that vote, Luzzatto had also made some concessions to his project, such as agreeing to reduce the overall size of the project by eight percent and feature 14 percent fewer units. The development would have retained 10 of the original trailer spaces (closure of 99 spaces).

McKeown previously expressed concern that several dozen VTP residents would be displaced in favor of a development that was not consistent with the LUCE. There were also questions of soil quality and land value.