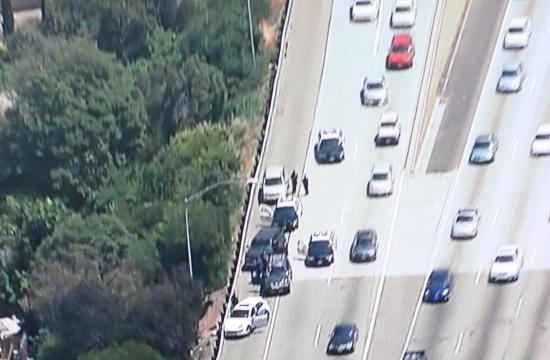 Westbound traffic on the 10 Freeway leading into Santa Monica came to a standstill just before lunch time Friday after a high-speed car chase ended near Bundy Drive.

CBS reports Los Angeles police notified the California Highway Patrol around 11:20 am that they were following a white Porsche SUV, reportedly stolen out of San Diego, on the southbound Ventura (101) freeway.

The suspects allegedly then reached 100 mph speeds traveling south on the 405 Freeway before heading west on the 10 Freeway.

The suspects hit a guardrail near Bundy Drive off the 10 Freeway and took off on foot, but were both arrested a short time later just before noon.