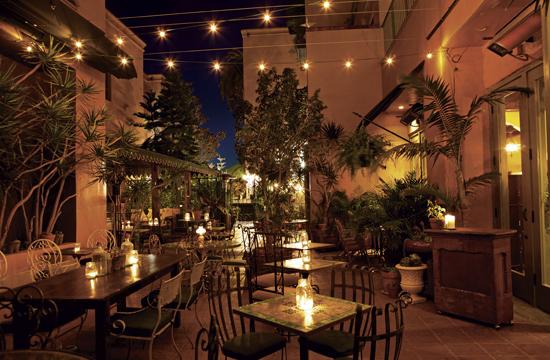 Tucked inside a courtyard behind the storefronts of bustling Ocean Avenue near Colorado Avenue is 41 Ocean, a hidden oasis of a restaurant and bar that that is like a trip back to the golden era of old Hollywood.

But before you try to walk-in or make a reservation know one thing: it is a private members-only club that’s not open to the public.

Co-developed by Jeremy Umland and Max Russo, the club aims to provide an intimate environment for like-minded individuals on the westside.

Russo said he developed the idea with several friends who wanted to open a private members club on the westside that had an old Hollywood theme, but wanted it to be located outside of Hollywood, geared toward entrepreneurs of all ages, male and female, from different industries.

“We set out to create a place where you can meet new people, create new business, have great food, enjoy great drinks, create good memories, and have a good time,” Russo said. “Membership isn’t judged on who your parents are, or how much money you have, but what you have done with your life and how you have lived your life.”

Russo said finding the perfect location was tough, adding many potential spots on the westside fell through.

That was until he was introduced to Jeremey Umland (founder/CEO of Ozumo Concepts International), who had signed a lease on the Ocean Avenue location and had a similar idea of creating a private club.

“We started talking and partnered up to do the club here,” Russo said. “We opened this year in late January.”

Russo said 41 Ocean has a membership board of 10 to 15 people who discuss applications before a member is accepted.

“The response has been incredible,” he said. “There’s nothing like it on the westside.”

He said 41 Ocean would cap its membership at 1000 members, adding each member can bring up to five guests each visit.

41 Ocean has partnered with celebrated chef and personality Raphael Lunetta, owner/chef of JiRaffe restaurant in Santa Monica, to act as its consulting chef.

“I’m here to assist with the culinary programs, get them up to speed, and make things nice in the kitchen,” Lunetta said. “That goes from organization of the kitchen, menu design, menu development, and keeping the continuity and efficiency in the kitchen.”

“The dishes are filled with vibrant colors and farmers market produce so it has a stimulating effect on your palette without being overwhelming or overbearing,” Lunetta said. “At the same time, I like to stick to what is classic and what is right, which is the style of cooking that goes back to fundamentals.”

With his past experience at working for member-only clubs, he said the menus are kept simple and feature adaptations of classic staples.

“What I try to do is keep everything very fresh,” he said. “For lunch, the chicken sandwich is probably one of the tastiest chicken sandwiches around. It’s Jidori chicken, all natural, no antibiotics. It has oven-dried tomatoes, fresh tomatoes, wild arugula, baby spring onions, and it’s on grilled bread. “At dinner, we do a Madeira braised chicken, just warm comforting eating where you can sit outside on the patio. We also have a filet of beef served with farmers market purple kale.”