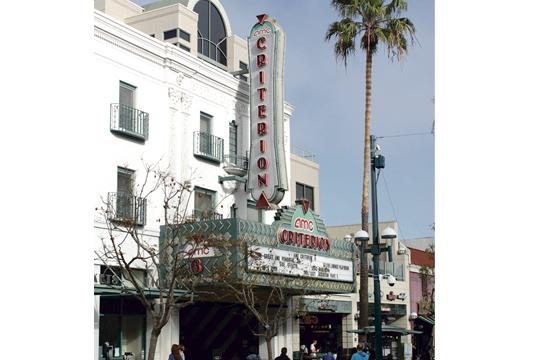 For almost 90 years, a movie theater occupied this space on the Third Street Promenade, almost directly across from a seven-screen theater on the corner of Third Street and Arizona Avenue. Originally built in 1924 and rebuilt in 1983, the AMC Criterion 6 has officially screened its last film.

When this writer visited the theater just before 9 pm Friday evening, the AMC Criterion 6 was dark. The doors were locked and no one appeared to be inside. The large marquee sign hanging above the front doors was not lit up.

“The Criterion is closed,” Andy Agle, the City’s Director of Housing and Economic Development, told The Mirror.

Agle said the former six-screen, 1,600-seat multiplex will give way to a retail store.

“My understanding is that the building owners are working with a retailer who will take over the space,” Agle said. “They have not told us the name of the retailer.”

Phone calls and emails to the AMC Media Relations Department were not returned prior to press time.

The departure of the Criterion 6 marks the second time in a few months span where AMC has altered its presence on the Promenade.

AMC had planned to build a new multiplex on the corner of Arizona Avenue and Fifth Street, where Parking Structure 3 currently stands. Plans called for a 70,000 square foot theater with more than 2,100 seats. A restaurant and public lounge were also part of the plans.

However, AMC allowed its exclusive negotiating rights with the City of Santa Monica to expire in November 2012. As previously reported in The Mirror, AMC had walked away from the proposed theater after it estimated the new location would not be profitable.

City Hall still moved forward in seeking to build a new theater on the Promenade. Last month, the city council approved a $60,000 contract extension allowing a consulting group – IJM Enterprises – to continue searching for a movie theater operator to bring a new facility to the downtown core.

A new movie theater was sought in the downtown area in light of a study released by the Promenade Uses Task Force. Established by the City Council in 2001, the Task Force sought “to understand how best to enhance the vitality and maintain the proper balance of uses on the Third Street Promenade and in the Bayside District.”

As part of its study, the Task Force determined the current mix of movie theaters in and around the Third Street Promenade “were outdated and likely would become less competitive in the near future unless they could provide appropriate amenities such as stadium seating and state-of-the-art technology.”

Agle said that City Hall has yet to find an operator to build that theater with “stadium seating and state-of-the-art technology.”

“On the cinema side, although there is nothing to report now, we are continuing our pursuit of upgrading the quality of the movie-going experience in the downtown,” Agle said.

The AMC Criterion 6, which was expected to shut down due to changes in the City’s zoning ordinance, was located almost directly across from the AMC Santa Monica 7, just south of Arizona.

According to the corporate office, AMC owned 338 theaters and 4,865 screens in 32 states, the District of Columbia, and three countries. Founded in 1920 and based in Kansas City, Mo., the theater serves 200 million guests annually and employs about 17,000 associates, according to the company. All numbers were as of September 2012.