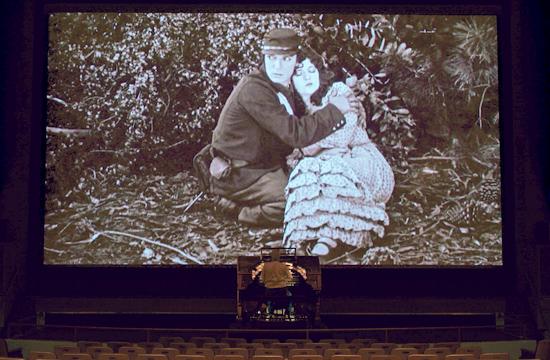 In the first, “Sherlock, Jr.” (1924, 45 minutes), Keaton portrays a wronged movie theater projectionist who dreams of becoming a great detective and clearing his name.

“Sherlock Jr.” is listed among the Top 100 Comedies by the American Film Institute and became a National Film Registry award-winner in 1991.

The second feature, “The Cook” (1918, 22 minutes) stars Roscoe “Fatty” Arbuckle as chef and Keaton as a waiter at the posh Bull Pup Café. The scene-stealer, though, could be the relentless Luke the Dog who joins his master, Arbuckle, in pursuing a would-be robber.

Believed lost for 80 years, “The Cook” was rediscovered in 1998 in cans of film belonging to the Norwegian Film Institute. The film was restored by the National Library of Norway.

It was Keaton’s last film before shipping off to fight in World War I, released after his unit had embarked for France.

Theater organ master and composer Robert Israel provides an original score for each film, which he will perform live.

Israel has scored dozens of silent films for Turner Classic Movies and release on DVD. He maintains a library of thousands of original theater scores, many rescued from downtown L.A. theaters. Israel is also a producer, orchestra conductor, and an avid film historian who brings his love for the medium to his roles as composer and keyboardist.

A far cry from its more sedate cousins, the theater organ features a wrap-around keyboard and chambers filled with pipes, cymbals, horns, drums and more, including sound effects. The Barnum Hall Wurlitzer is a full-featured instrument with dual organ chambers flanking the stage.

Built in 1937, Barnum Hall was designed as a cultural center for the City of Santa Monica. Its Steamline Moderne design includes porthole windows in the doors and rounded corners that call up images of steamships of the time.

The hall fell into disuse and disrepair upon completion of the new Santa Monica Civic Auditorium in 1953, and the organ was destroyed in the 1994 Northridge Meadows earthquake. In 1997 the hall was closed. It was restored and improved thanks to a local bond measure and private donations.

Organ enthusiast Gordon Belt donated the current Wurlitzer in 2004. It was redesigned and installed by the Crome Organ Company and debuted in 2010.

Since then, Barnum Hall has added full theater projection onto a 38-foot screen, enabling a theater-going experience echoing – and in some ways, improving upon – that of the films’ original theatrical showings.

Writer and Keaton expert Patricia Eliot Tobias will share behind-the-scenes stories from the making of the films.

The evening begins at 7 pm on Saturday, April 27, at Barnum Hall on the campus of Santa Monica High School, 600 Olympic Boulevard, Santa Monica.

Parking is at the Santa Monica Civic Center, 333 Civic Center Dr. (corner of Olympic Drive and 4th Street). Limited parking on the Samohi campus (off Olympic, at 6th Street) will be available for those with handicapped placards.

Admission is $10 ($5 for students and seniors) available at the door. Advance tickets may be purchased online at www.samohiband.org. Proceeds benefit the Santa Monica High School Band.