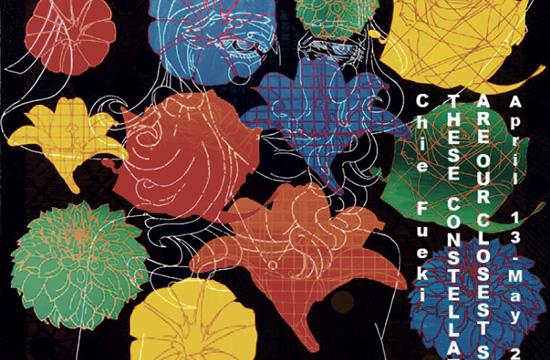 Shoshana Wayne Gallery presents a solo exhibition of Chie Fueki’s new paintings today, April 13 through May 25. This is Fueki’s fourth show with the gallery.

A cursory glance at Fueki’s new exhibition reveals an artist known for her glam surfaces, outré fastidious rendering, decalcomania cal motifs, and pop-folk iconography at her most visually superlative.

But don’t let Fueki’s characteristically seductive optics camouflage their true content: a lingering gaze over Fueki’s exhibition as a whole reveals something more peculiar woven throughout the counter-veiling spectacle, a deeper enigma at the heart of what lies “all on the surface.”

A series of paintings on panels of relatively equal dimensions surround the viewer lining the walls around the circumference of the gallery. Each panel bears the likeness of the same woman, wearing the same hat, facing the same direction in a circuit broken only by her symmetrically mirrored image in a couple of calculated irregularities. The subject of Fueki’s portraits seems to fix her gaze elsewhere at the very insistence that she is everywhere at once.

Fueki’s work has always dabbled in the elliptical parallelism between high renaissance art, 80‘s scroll screen computer game graphics, art nouveau naturalism, early modern orphism in painting and fashion, Japanese folklore and Shinto animism; the rediscovery of the radical psychedelic tropicalismo of her childhood spent in 70’s Brazil, and the flat fixations of Anime culture. The complex curvature of her figuration seems to combine the lyrical subtlety and baroque trajectory of Bezier curves, with older forms of vector graphics and Euclidian geometries, analogously present in non-albertian non-western representations of space such as the Edo period woodblock prints or Hiroshige.

The surfaces in each painting are layered with painted paper and collaged onto the surfaces, which are painted on again. The flower motif repeated in several works are sometimes hand painted, sometimes silk screen collaged. Fueki’s pattern and decoration is steeped in codes of feminism and analogous reversals of normative identity roles through the optical exchange of figure and ground, origin and motif.

Fueki’s repetition and sequencing places her in a dialogue within a certain pitting of seriality against the narrative sequence of the image. Her repetition plays in the culture of the copy; where the contradiction between the procedural and the intuitive is the narrative foil to the larger questions of image ownership and dissemination; franchise remakes, networks, new manners, friendships and social atomization. More importantly, as a child of third culture experience, (having grown up in Brazil to Japanese parents, relocating to New York in the 90’s), Fueki’s imagery is an issue of both speculative identity and questionable ownership.

Assuming that Fueki’s portrait is an assemblage of different identities and likenesses, how do we as viewers know from whence she came? Certain clues refer back to Fueki’s stylistic synthesis of Tropicalia and super flat aesthetics. The hat of Fueki’s protagonist bears uncanny resemblance to that of a famous Brazilian pop singer, Nara Leão, on the cover of her album “dez anos depois”, and on the cover of the classic Tropicalia record “Bread and Circuses” (where she appears in a photo held by Caetano Veloso). She looks a little like an Echo Park folkie, a little like Carmen Sandiego. But who is she really?

Each of Fueki’s serially similar canvases seems to contain elements of a structural nature breaking through the dense figure-grounding of pattern- literally, silhouettes of various flora transposed through a dense network of grids and lattices. Fueki’s other botanical schema evoke the textile and wallpaper designs of William Morris. But Fueki is no anti-modern child of nature. As in her previous work, the natural is rendered with such technical precision as to seem “technological” in a way that evokes early 3-d modeling, computer graphics and isometric architectures leaping out of their diagrammatic 2-dimensionality.

Like any work of art operation, we can assume that our understanding of even the most pictorial and decorous image is one of apophasis: what’s at stake is a combination of what elements are visibly present, with those issues rendered conspicuously absent.  In other words, Chie Fueki’s paintings, camouflaged in botanical tropicalia and diagrammed between perspectival systems, aren’t about the glancing circuit of her mysterious protagonist, they are about the eye of the beholder.