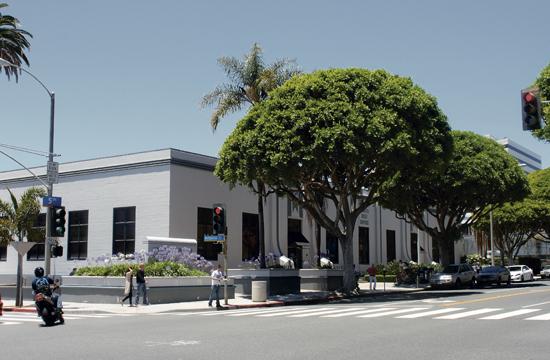 I think Americans are unfairly and even wrongly apathetic about whether or not the U.S. Postal Service survives into the 21st century. Waiting in line at any of the three Santa Monica branches I frequent (5th and Arizona, 1217 Wilshire, 2720 Neilson Way) one is tempted to point at trends and conclude that the day of the mailed letter, the brown paper-wrapped box from Grandma for your birthday, the card with $5 in it for your high school graduation… all of that is vanishing Americana.

But should it be that way? Right off the bat I would argue that citizens should resist having expensive overnight package delivery becoming our only means of getting a parcel from here to there. If you think the way you’re being pushed around by oil companies at the gas pump is antithetical to democracy, wait until you pay $50 to send Silly Putty and an Etch-A-Sketch to your nephew for his birthday. Unless that’s what it already costs to absolutely positively get it there overnight.

Which brings us to our own responsibility for what’s happening to the U.S. Postal Service: We’ve become too convenience-reliant. Convenience-addicted might be more accurate. Once overnight service was introduced to American business, there was no getting out from underneath it. A client could simply insist that some physical thing be in their possession by the next day. Not because there had in fact been a marked increase in the speed at which business was transacted, but because Fed Ex and the others allowed you to push people’s buttons that way. “What fun! I just told San Diego we HAD to have that thing by tomorrow noon!”

This became the template later on when e-mail and e-mail to phones were standardized. “Send it to me now.” We felt elevated, taller, bigger because we could insist on having things arrive at our end whether time was a factor or not. Rapid delivery of materials became a measure of respect and business acumen, although you can get blueprints delivered overnight for a project that is later held up for months or even years. And there’s an undeniable element of vanity in all of this high-speed delivery; one that was rarely present when, say, a letter from a friend conveniently arrived in your mailbox in its own sweet time.

While it feels generational to argue the merits of a written letter delivered by postal mail over the immediacy and attached pictures of one’s cat provided by e-mail, I found myself a bit depressed recently when I overheard a conversation about the “point” of mailing Christmas cards. I know my own “point” for doing it, but those in the conversation were right: To mail holiday cards is now a quaint custom. However, sitting and listening to a musical holiday card in your e-mail can feel a lot like answering the door at 8 am Saturday to chat with the Jehovah’s Witnesses. In both cases, the intentions are good, but…

So there we have a look at the current environment. Now: “Five Reasons We Want to Save the U.S. Postal Service.”

One: Like General Motors after their big fat bailout I believe the USPS is trying. I’m a fan of their “If it fits, it ships” boxes that actually work for much of my personal shipping. This one service product alone, to me, indicates that the USPS still has something to give.

Two: You honestly can’t drive everything to and from the Internet. The holiday catalogs our household received this past season tell me that there’s still a need to prompt commerce with hard-copy mailings; that you can’t just set up a site and expect that shoppers will find you and respond. Yes, there is a serious uptick in online sales. But what is it that is first pushing customers to those sites? Television, the box with sound that sits in our living rooms, is also something of a tech throwback now. But we appear to need it to tell us about things that we then pursue online.

Which gets us to Three: Sorting and Division equals Freedom. If every single interaction of business and communication becomes Internet/Smartphone driven… can you hope that those involved will give you unbiased access? For all their old-school slowness and bother, paper newspapers and postal mail still operate as soldiers defending our right to know. There’s a function of sorting and dividing done by old school media that you could ask your computer/phone to do for you. But that will include whatever prioritization of information and advertising the corporate parent of your information delivery system wishes to impose. I’m saying, a simple mailed letter asking you to fight the Keystone pipeline might not ever make it to your e-mail box if one day next week three merged super corporations own everything.

Four: Without the USPS delivery of parcels, flats, and letters we’re at the pricing mercy of corporations. If you enjoy how they’re treating you now, fine.

Five: People. People need the jobs, and people need to get out of their homes and be in social situations that are defined by civility and common courtesy. We’re starting to think we can literally throw credit cards at others and be on our way, because we’re all priority customers. I’m arguing that we should have the shared experience of standing in a line every once and a while with our neighbors and calmly wait our turn. And if I’m right about this, then the Post Office is our nation’s premiere provider of this needed service.

Hear from local residents who took the plunge at the (almost) annual Polar Bear Plunge hosted by The Annenberg Community...