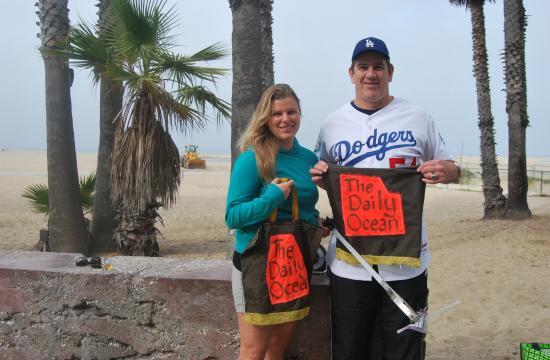 One of Santa Monica’s most valuable assets is the approximately three miles of beach that make up the City’s western edge. A pair of Santa Monica locals and long-time beach lovers hope fellow residents will join them this Saturday to help keep at least one small portion of the beach as clean as possible.

Samohi alumnus and former Los Angeles Dodgers pitcher Tim Leary joins forces with Sara Bayles, founder of The Daily Ocean, to host the beach cleanup day. They are requesting fellow Santa Monicans join them this Saturday morning, between 9 am and noon, to help remove some trash from the sand.

The duo will be at a portion of the beach just south of the Santa Monica Pier to collect a few undesirable objects resting atop the sand.

Specifically, they will be set up at the end of Pico Boulevard, where the storm drain meets the beach. A table will be set up on the boardwalk between Shutters and Casa Del Mar, just beyond where Pico ends. The cleanup will take place between lifeguard towers 18 and 20.

Parking is available at lots adjacent to Bay Street and Appian Way. Meter parking, for up to five hours, is also available in the surrounding blocks.

Bayles and Leary are hoping Santa Monicans and other beachgoers can commit as little as 20 minutes to help keep the beach clean. Anyone who is interested in helping out only needs to bring a pair of gloves and a recyclable bag.

There is no minimum amount of trash to pickup. Leary told The Mirror every little bit helps, even if it is just a handful of litter.

Basically, anything that is unnatural to the beach is fair game to be collected as trash, including but not limited to cigarette butts, lids from plastic bottles, discarded wrappings of food items – anything human made that is resting in the sand instead of a trash can.

Whatever one can pick up within 20 minutes would make a big difference in keeping the beach clean, Bayles and Leary said.

The beach cleanup is a collaboration between the Samohi Alumni Association and Bayles’ The Daily Ocean.

“There are a lot of people who are into being green,” Leary, who won a World Series ring with the Los Angeles Dodgers in 1988, told The Mirror two weeks ago. “Five people are better than zero. This is open to everybody.”

After collecting noticeable trash from the sand, they will be able to weigh what they have collected.

The amount weighed will be added to the cumulative total of trash collected since Bayles started her efforts in March 2009.

As previously reported in The Mirror, Bayles has collected more than 1,300 pounds of trash on a small stretch of Santa Monica Beach since 2009. She has visited the beach 365 times during that stretch.

Her efforts as part of The Daily Ocean is a beach cleanup “experiment,” where Bayles hopes to inspire others to take ownership of local beaches and keep them as clean as possible.

Locals and beach enthusiasts can join Bayles and Leary at Santa Monica Beach anytime between 9 am and noon on April 13.