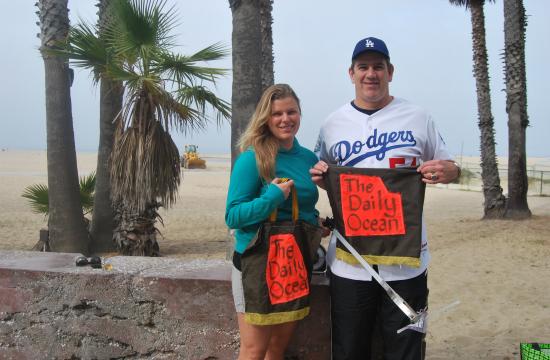 When Santa Monica High School alumnus and former Los Angeles Dodgers pitcher Tim Leary picked up a copy of The Mirror in December and read about a woman collecting 1,300 pounds of trash from a small stretch of Santa Monica Beach within a four-year period, he immediately wanted to find a way to connect with this dedicated person.

Almost four months later, Leary and Sara Bayles are teaming up to coordinate and organize a beach cleanup day at Santa Monica Beach.

Come Saturday, April 13, both Leary and Bayles will take to a portion of the beach just south of the Santa Monica Pier to collect a few undesirable objects resting atop the sand.

The pair hopes others will join.

“There are a lot of people who are into being green,” Leary, who won a World Series ring with the Los Angeles Dodgers in 1988, told The Mirror. “Five people are better than zero. This is open to everybody.”

A team effort bringing together Bayles’ blog called The Daily Ocean and the Samohi Alumni Association, the beach cleanup – taking place between 9 am and 12 pm – aims to have Santa Monica residents and beachgoers to take pride in the iconic landmark.

Leary said anyone who is interested in helping out only needs to commit 20 minutes and bring a pair of gloves and a recyclable bag.

After collecting noticeable trash from the sand, they will be able to weigh what they have collected.

The amount weighed will be added to cumulative total of trash collected since Bayles started her efforts in March 2009.

“I’m keeping up the trash collection and reaching out to more people,” said Bayles, adding that she is about to set up a website where people could login and register how much trash they have picked up.

Her efforts as part of The Daily Ocean is a beach cleanup “experiment,” where Bayles hopes to inspire others to take ownership of local beaches and keep them as clean as possible.

Basically, anything that is unnatural to the beach is fair game to be collected as trash, including but not limited to cigarette butts, lids from plastic bottles, discarded wrappings of food items – anything human made that is resting in the sand instead of a trash can.

“I just want to keep growing The Daily Ocean and helping the planet,” Bayles said.

Others can join Bayles and Leary in helping the planet by taking part in the clean up at Santa Monica Beach on April 13.

The duo will be set up at the end of Pico Boulevard, where the storm drain meets the beach. Specifically, they will be on the boardwalk between Shutters and Casa Del Mar, just beyond were Pico ends. The cleanup will take place between lifeguard towers 18 and 20.

Parking is available at lots adjacent to Bay Street and Appian Way. Meter parking, for up to five hours, is also available in the surrounding blocks.