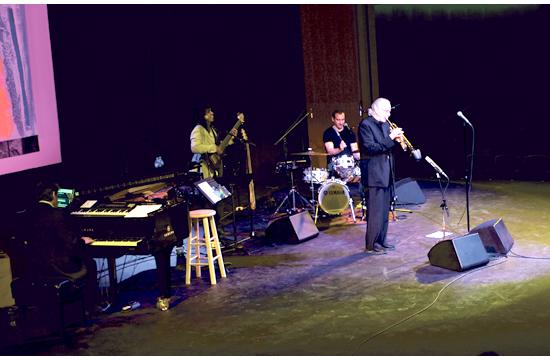 Respected musicians Herb Alpert and Lani Hall headlined a special inaugural concert at the brand new Ann and Jerry Moss Theater, located on the campus of New Roads School at the Herb Alpert Educational Village in Santa Monica, on March 24.

The Ann and Jerry Moss Theater, is part of the Capshaw-Spielberg Center for Arts and Educational Justice, a $24 million project of New Roads School and New Visions Foundation under the combined leadership of David Bryan, President and Head of School at New Roads, and Paul Cummins, CEO of New Visions Foundation.  Completed in  February, the theater. seats 344 and has acoustics engineered by Yasuhisa Toyota,  acoustician for Disney Concert Hall in Los Angeles.

The state-of-the-art facility was constructed with materials designed to maximize acoustics, including an Alaskan Spruce stage (the same type of wood of which piano sound boards are made), and acoustic seating.

Primary donors for this project were Herb Alpert and Lani Hall, Steven Spielberg and Kate Capshaw, Ann and Jerry Moss, and Phil and Monica Rosenthal.

The piano featured at the hour-long performance was Yamaha’s flagship CFX Concert Grand that was provided on loan by Yamaha Corporation of America and co-sponsored by Keyboard Concepts, a leading piano retailer with four locations throughout Southern California, including 3232 Santa Monica Boulevard in Santa Monica.