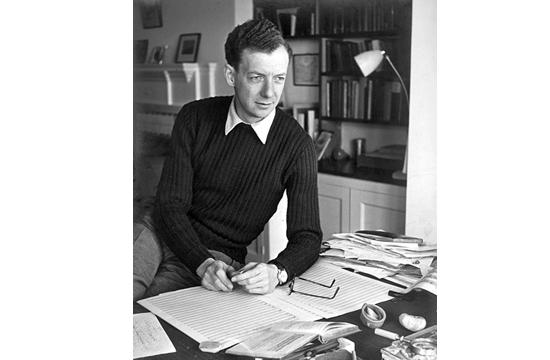 This 7:30 pm concert takes its theme from the storied Brooklyn residence where Britten and his partner, tenor Peter Pears, lived in the early 1940s with legendary writers and other cultural luminaries.

The concert will feature solo and two-piano music by duo pianists Anna Grinberg and Liam Viney, Keve Wilson on oboe, and Eric Jacobs on clarinet.

In 1939, Britten and Pears left England by ship to avoid the war and start a new life in New York, where they became lovers.

For a busy and intoxicating year, they lived at February House with W.H. Auden, Gypsy Rose Lee, Jane and Paul Bowles, magazine maven George Davis, the children of Thomas Mann and Carson McCullers.

The concert evokes this creative and social nexus with music by Thomson, Copland, Paul Bowles and McPhee, as well as by Britten.

“I cannot imagine a finer performance, as this one had everything, illuminating every bar of the music,” wrote Ivan Katz, director of Yale University’s Horowitz Series. “The audience went wild.”

Jacaranda will give the U.S. debut of the belatedly published McPhee arrangement for two pianos of Britten’s “Variations on a Theme of Frank Bridge” for string orchestra. Also by Britten, the fiercely energetic “Overture: Paul Bunyan,” not used in the ill-fated Broadway-bound operetta.

Jacaranda’s Britten celebration continues April 27 with a concert staging of “Curlew River,” a chamber opera (1963) intended for performance in a church.

Jacaranda’s Britten celebration and current season come to a close with “Young Apollo: God of Music, Poetry and Healing” on June 1.