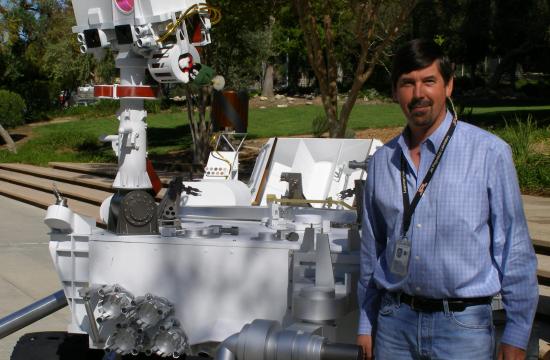 Are you curious about learning more on NASA’s Curiosity rover?

If you answered ‘yes,’ consider heading to the Santa Monica Public Library this Saturday when it presents “The Curiosity Mars Rover: From Launch to Landing” and “Bringing the Findings Back Home” at 1 pm in the Main Library’s MLK Jr. Auditorium, 601 Santa Monica Boulevard.

Curiosity, the Mars Science Laboratory (MSL) rover, was launched by NASA in November 2011.

Since landing, the rover has operated successfully, driving more than 700 meters across the surface of the planet, returning hundreds of images, analyzing gas and soil samples, and drilling into Martian rocks.

Keith Novak, a Senior Engineer at the Jet Propulsion Laboratory (JPL) in Pasadena, will discuss how this amazing feat of engineering was accomplished, and presents images and science results from the mission.

Novak is a thermal design engineer in the Spacecraft Thermal Engineering and Flight Operations Group at JPL, and was the lead thermal control engineer on the Mars Pathfinder (1997) Mission Operations Team.

He was the Rover thermal design lead for the Mars Exploration Rover (MER) project (2003) and the thermal lead on the MER flight operations team.

He was the Rover thermal design lead for the Mars Science Laboratory (MSL) Curiosity Rover (2011) and is currently the MSL Mission Operations Thermal Team Lead.

This program is made possible through the support of the Friends of Santa Monica Public Library.

The event is free and open to the public. Seating is limited and on a first arrival basis. For more information, call 310.458.8600 or visit smpl.org.