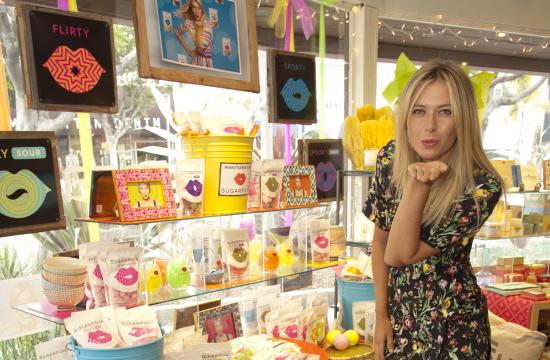 After making a name for herself as one of the world’s toughest competitors on the tennis court, Maria Sharapova is now positioning herself as the source of sweetness.

A top-ranked tennis player and Grand Slam winner, Sharapova has forayed into the world of satisfying sugar rushes with her own candy line. “Sugarpova,” as it is called, has arrived in Southern California, as Sharapova debuted the candy line April 13 at a boutique shop in Manhattan Beach.

In debuting the candy line last week, those purchasing Sugarpova also contribute to charitable causes: a portion of the proceeds from last weekend’s introduction and launch was allocated to the Maria Sharapova Foundation and a local South Bay charity, Walk With Sally.

More than 700 bags of candy were sold during the event and raised $1700 for Walk With Sally with the auction of Maria’s racket and a “tennis date.” The winner was Jim Flick of Palos Verdes.

According to Sharapova’s team, the candy line interprets “classic types of candies in her own signature style.”

“A long time personal candy lover with a sweet tooth, Maria developed a new level of quality to the candy category in unexpected and fun types and shapes – with playful names to match,” her team stated. “Wrapped up in a beautiful package, it’s both style and substance, just like the founder Maria Sharapova. Each unique candy flavor is represented by a bold and colorful pair of lips that represent the many fun-loving sides of their namesake creator.”

In speaking with The Mirror, Sharapova explained it took two years to develop the candy line.

Yet, she added though she has been affiliated with many brands throughout her professional tennis career, it was also important to her to be more than just a name associated with a product.

Sharapova wanted to be more involved with the decision-making process as to how the brand was promoted and represented her as a person.

“I’ve really been blessed over the years to work with amazing brands,” Sharapova told The Mirror. “At the end of the day, I was a big part of what they were doing but making the final decisions. I had the itch to do something on my own.”

Venture off on her own she did, as Sharapova partnered with renowned candy expert Jeff Rubin, also known as “The Candy Man.”

She added the fact she is recognized around the world will help her leverage her brand to help others.

“I think one of the greatest gifts of being a professional athlete … is it opens your eyes to people who don’t have opportunities,” Sharapova told The Mirror, adding some of her greatest contributions to charity is to the United Nations and causes associated with helping victims of the nuclear accident in Chernobyl.

The Russian tennis star, who celebrated her birthday on April 19, said her family left their homeland of Belarus due to concerns of the regional fallout after the Chernobyl accident shortly before her birth.

Winner of the 2012 French Open, Sharapova also played at the London Games, U.S. Open, and Wimbledon last year. Other brands she has been associated with include TAG Heuer, Cole Haan, Nike, Evian, Head, and Samsung.

To find out more about Sugarpova or to purchase some candy, visit www.tabularasamb.com or www.sugarpova.com.