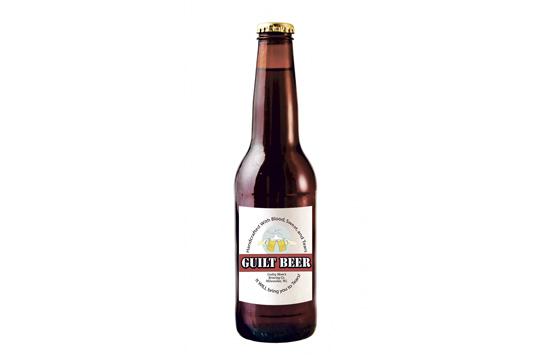 The popular food trucks known as “Mom’s Recipe” that have for years provided home-made “comfort food” to thousands of hungry Santa Monica eaters – many of them under siege by trendy restaurants and healthful dietary fads – has announced they will now also offer “Guilt,” a new high alcohol beer being test marketed in Southern California.

“Guilt beer instantly induces a feeling in the consumer that they have neglected something significant in their lives in the pursuit of a high profile career or a shot at being a reality show whore,” said Guilt Brewery director of marketing Sid Hackenberg. “Many times people will drink a large bottle of Guilt, then immediately phone a loved one or give up their stalled acting careers to become more involved with their churches. What we’re doing is marrying our product to people having difficulty finding their niche in LA and as a result are eating huge bowls of food truck macaroni and cheese when they think nobody is looking.”

By locating their trucks near Hooters and cigarette shops they have enjoyed success not only with local citizens but with tourists from around the world looking for some comfort and an escape from Santa Monica eateries with names that begin with “El,” “Del,” or “La.”