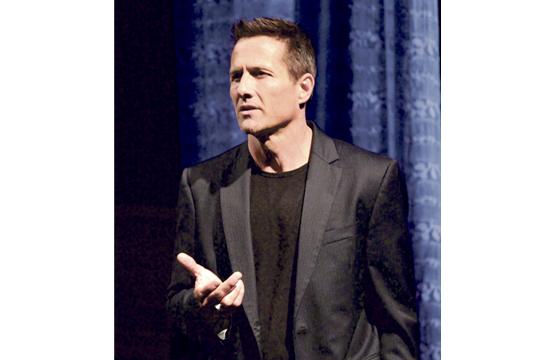 The Edgemar Center for the Arts, in the intimate Second Stage auditorium, this weekend opens the world premiere engagement of a new play “One White Crow.”

The production will open this Saturday through May 26, then June 14- June 23, with shows on Fridays and Saturdays at 8 pm, and Sundays at 5 pm.

Tess O’Neill (played by Jane Hajduk) is an investigative journalist assigned to profile renowned television personality and psychic medium Judith Knight (played by Michelle Danner). Judith claims to make contact with people who have died, connecting them with people in the audience.

The assignment is no accident. Tess is the daughter of a brilliant late science writer, who would have never believed in Judith’s abilities.

To Tess’ alarm, Judith claims that Tess’ dead father has visited her and that the profile is his idea. Tess’ every instinct suggests to her that Judith is a charlatan. But what if she’s not?

Tess enlists the aid of Alex Rimbaud (played by Rob Estes), a professional skeptic, and Tess’ father’s former protégé. He is convinced that Judith is a con artist and plans to publish a magazine piece exposing her as a fraud. While Tess consults Alex, their long-repressed passion for each other is revived.

Things begin to happen that make Tess start to question her long-held beliefs. Tess, Alex, and Judith are headed for a showdown as Tess is determined to learn the truth once and for all. Is Judith a fraud? Or is Tess’ father actually trying to make contact with her from the beyond? What will this bode for Tess’ and Alex’s future together?

The title of the play, “One White Crow,” is explained during the course of the narrative. It’s a reference to a quote by William James (1842-1910), the father of modern psychology. He was also famous as a skeptic and a debunker of practitioners of the paranormal.

Admission is $34.99. A limited number of seats will be available for each performance at $25. The Edgemar Center for the Arts is located at 2437 Main Street, Santa Monica.

For reservations or more information, call 310.392.7327 or visit www.edgemarcenter.org.