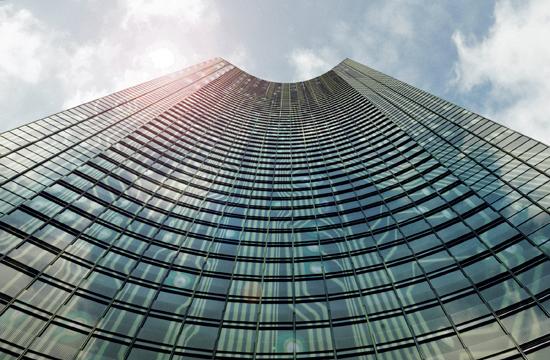 Only weeks after a conglomerate of Dubai businesses funded a hostile takeover of the Santa Monicans for Renters’ Rights (SMRR) and sponsored a successful recall election of the entire Santa Monica City Council, the newly installed panel of public officials wasted no time getting to work. Their first order of business at last night’s council meeting: approve a Development Agreement (DA) for the world’s largest hotel.

Once built, the hotel will stand 1,300 feet off the ground, or 51 feet higher than New York’s Empire State Building.

The “Republic of Santa Monica” hotel will be funded and constructed by Stately Princes, Inc., a group of 45 business owners based in Dubai. According to City staff, the price tag is expected to be $5.73 trillion.

Council members unanimously approved the project after deliberating the project for all of five minutes. City staff did not make a presentation. A representative of the developer, however, addressed the council for 90 seconds.

“This hotel will bring in 20,000 new tourists to Santa Monica every hour,” Don Key Kong told the council. “Between the Expo Line, Santa Monica Airport, and several cruise lines docking at local beaches, we conservatively estimate the hotel will be at 90 percent occupancy each night. That will translate to $18 million in tax revenue each month.”

In attempting to show faint interest of the concerns raised by local residents, Mayor Ben Dover asked Kong how he plans to deal with the absurd amount of traffic the hotel will surely generate.

“With modern advances in technology, this will be the world’s first-ever floating hotel. The entire foundation of the building will be built with state-of-the-art hover technology,” Kong said. “It’s basically a flying hotel. We can move it anywhere within a five-mile radius, which means we can pick up guests directly from LAX. Whenever a cruise ship arrives at the shores of Santa Monica, guests don’t have to step foot onto Santa Monica land. They can walk straight into the hotel.”

Of course, the planned development did meet with opposition from local business and residents.

The Not-Playing-Fair Mont Hotel joined forces with the Hunt Lee Hotel and created a coalition to mobilize citizens against the construction of the new hotel.

Local activist Johnny Blaze warned the hotel was the first step in changing Santa Monica from a republic to a monarchy.

“How can you name this flying monstrosity the ‘Republic of Santa Monica?!’ Bring in a few fellows from Dubai and we might as well kiss rent control goodbye,” Blaze said. “I guess it’d only be a matter of time before we see everyday homes torn down and replaced by royal palaces.”

Council member Dick Liddle retorted the planned hotel will bring new jobs and revenue to a city in deep need of money.

“It’s not just blue-collar jobs, but think of all the engineers we’ll need to keep the hover-foundation perfectly operational,” Liddle said. “And the financial consultants needed to ensure the millions of dollars in tax revenue is properly invested in slush funds and off-shore accounts. Heck, there could be enough money in this thing for us to build a wall all around Santa Monica and make us a self-sustainable city. After all, didn’t the previous council approve the Sustainability Bill of Rights? This project will help us realize that dream!”

Liddle’s comments were sufficient to convince the rest of council to vote in favor of the DA.

The hotel, when complete, will enter the Guinness Book of World Records as the world’s tallest hotel.

The structure also becomes the largest building in Southern California, etching out the U.S. Bank Tower in downtown Los Angeles. That building is 73 stories tall.