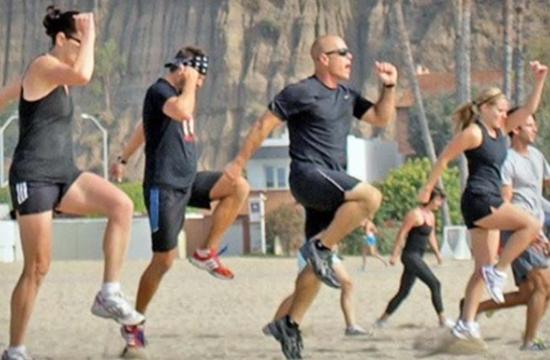 Private fitness trainers and City Hall are making headway in coming to terms of how exercise instruction may take place at select public parks and the beach in Santa Monica.

The City Council unanimously agreed Tuesday night to look into loosening regulations for personal trainers who offer classes at Palisades Park and other public areas.

Council members directed City staff to put together an ordinance that would effectively serve as a middle ground.

Private fitness trainers would be allowed to continue offering classes in certain public areas but with some restrictions.

The council direction comes a long way from the rift that previously existed between City Hall and private trainers.

Both sides were at odds about how much the City could collect from a trainer’s gross revenue, the size of classes offered, and the use of heavy weights.

City Hall had considered possibly banning all fitness classes larger than two people at Palisades Park and prohibiting the use of heavy weights.

With the council’s recommendations Tuesday night, some heavy equipment may now be allowed on-site.

Group classes may also be offered in addition to individual instruction. An agreement may also be reached with respect to the amount of money City Hall would collect from the private trainers.

A permit system may also be put into effect.

Prior to the council’s Tuesday meeting, City staff and officials had met with community members and private trainers to get a better grasp of the issue and discover possible compromises.

At the April 23 council meeting, it was proposed that private trainers pay City Hall 10 percent of their gross revenues. Previous proposals pegged that rate at 15 percent. Also, weights of 25 pounds or more may potentially be allowed at the beach and Clover Park.

The specific restrictions that would apply to private fitness classes in public spaces would be clarified when an ordinance is presented to the council. Yet, Council members said some restrictions would be necessary.

Private fitness classes on city-owned property came to the council after City Hall reported of complaints by residents of group training programs and boot camps at Palisades Park and other locations.

“For several years, community members have regularly complained to staff about the proliferation of unregulated fitness training and boot camps in City parks and at the beach. Most of the complaints about this activity refer to the intense use of the north end of Palisades Park,” City staff stated.

Other recreational activities conducted at public parks and area beaches, such as tennis and surf instructions, are already regulated by City Hall.

“For years, the City has required tennis instructors to obtain permits and pay fees for court use. Surf instruction permits have been awarded since 2008 to a select number of instructors, all of whom have business licenses, pay permit fees, provide proof of insurance, and share a percentage of their revenues,” City staff stated. “The City also contracts with instructors to conduct classes inside park facilities, outdoors, and at the beach with shared revenue and other requirements.”

Private fitness classes, irrespective of size, at public parks and beaches have been prohibited or heavily regulated in other cities.

For example, all private trainers in Redondo Beach are required to contract with the city and offer their services through city-sponsored classes.

In Manhattan Beach, private trainers are screened and are limited as to when and where they may conduct their classes.

City staff expects to return to the council during the summer with a proposed ordinance.

The statement said the coalition was grateful for the “courage the Santa Monica City Council exhibited” to ensure that “balance is struck.”

“We look forward to working with the City to protect and preserve these priceless spaces,” the statement read. “It’s clear from the enormous amount of public comments in support of fitness training in our public parks, and the support of the majority of City Council members, that there is a balance that can be struck to ensure fair and equitable use of these unique spaces for group fitness, contemplation, family picnics, mental and physical health and so much more.”