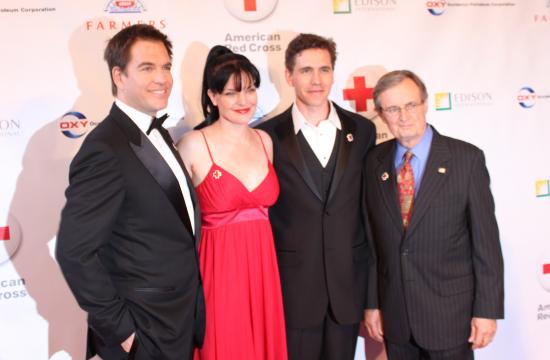 The Red Cross shone the light on celebrity supporters of the Red Cross, but there were men and women walking the red carpet who were more important than the big names: service men and women from all branches of the armed forces.

The theme for the evening was “A Salute to the Armed Forces.”

As part of the celebrations, the Crystal Cross Award for outstanding support of the American Red Cross was presented to the cast and executive producers of “NCIS.”

The CBS production was selected for the job it does promoting the Red Cross on its show.

The Rick Crocker Spirit of Volunteerism Award, which is named for the Santa Monica police officer, Red Cross volunteer, and Iraqi war veteran who died in 2005, was presented to Dr. Richard Corlin, of St. John’s Health Center.

Dr. Corlin was selected for the award for his dedication and community service to the Santa Monica and the Westside community for more than 30 years. Dr. Corlin, and his partners-in-practice, have provided gastroenterology services without charge to local patients on a regular basis since the 1980’s.

“We have a lot of troops coming home after the Iraq war and Afghanistan,” Devine said. “I just completed three stories at Fox 11 about our armed services. Being here in Los Angeles and tapping into our celebrities who are willing to give back is really important.”

Dietzen, who plays Jimmy Palmer in “NCIS” said: “We’ve been kind of fortunate to be around to hang out and rub elbows with the real heroes, the rescue workers, that we somewhat portray on our show.”

Weatherly, who plays Special Agent Anthony DiNozzo in “NCIS” said: “Every year we have hundreds of people come through our set as part of charity set visits. Tonight is a big event. But it’s just a piece of the greater whole and certainly makes all of us feel better about how lucky we are.”

Perrette, who plays Forensic Specialist Abby Sciuto in “NCIS” said: “The only thing to me that is okay about being famous – because I’m very uncomfortable with it – is that I have had a voice and a bigger light to shine on causes that are important to me.”