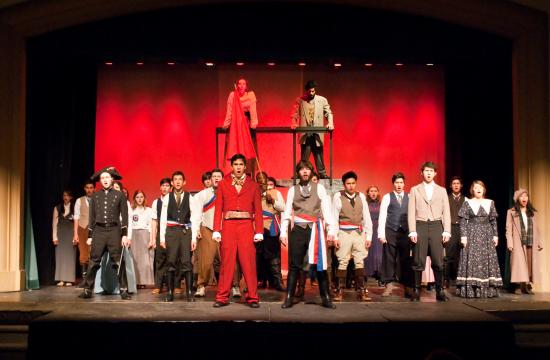 SMCHS students have been preparing for months and their dedication has paid off.

This is truly a stunning performance with the caliber of work seen in professional productions.

The production, based on the 19th century French novel by Victor Hugo, is particularly challenging as there is very little speaking and actors sing through most of their parts, much like an opera.

The cast consists of talented SMCHS students in multiple grade levels, hailing from elementary and middle schools throughout Santa Monica.

The story is especially compelling and the themes of love, redemption, courage and forgiveness are woven throughout.

School President, Thom Gasper raves, “This production exceeds everything I’ve come to expect of high school musicals. This cast and crew pulls off a depth of performance that honors the immense expectations of this show. The talent evident in the interpretation and professional execution of this challenging production will impress even discerning theater-goers.”

The story is by Alain Boublil and Claude-Michel Shönberg. Both the acting and the technical aspects of the show are carried out by the students.

Tickets can be purchased on the school website, www.stmonicahs.org.

Though this show may be too mature for very young viewers, the themes of redemption and mercy prevail.

A matinee performance is scheduled for April 27 at 2 pm.

SMCHS provides a safe, faith-based learning environment focused on the intellectual growth, athletic and artistic development, and model citizenship of its students.