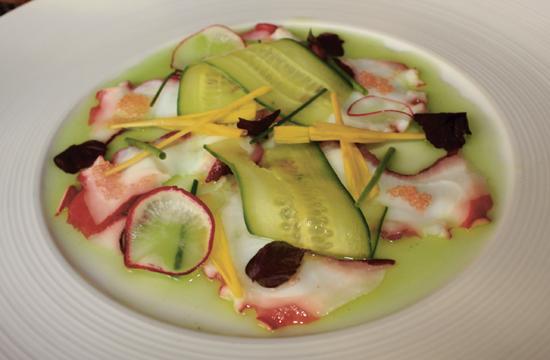 With many “Top Chef” style programs on TV, Santa Monica restaurant Sushi Roku says ingredients such as octopus are becoming more popular, making many of its dishes more desirable to customers.

In late-February, the restaurant debuted a handful of new menu items, including an expanded selection of non-traditional sashimi.

The new menu items include artfully prepared standouts that are quickly becoming fan favorites, such as the Octopus Sashimi Kyoto Style with a refreshing herb vinaigrette that has a nice green color to make the dish even more appealing to the eyes.

“The ideas come from eating at a lot of restaurants in the six month period and taking inspirations and interpreting them to what works within the ‘modern Asian cuisine’ concept,” Cardenas said.

Have you ever wondered what is the key to perfect sashimi?

Cardenas said there are two main reasons why there is a difference between good sashimi and great sashimi.

“First is the freshness and then the talent of the ‘itamae san’ or sushi chef on preparing the perfect cut not to be too large or too small to enjoy the full flavor and texture of the fish being served,” he said.

Cardenas said another popular dish off its regular menu was the “Premium Wagyu” Japanese beef Toban-Yaki.

“Japanese beef was banned in the United States for several years and now made available again,” he said. “The marbling and flavor profile of Japanese Wagyu is known to be the best in the world.”

Sushi Roku Santa Monica opened in 1999, two years after the inaugural Sushi Roku opened in Hollywood on 3rd Street in 1997.

This unique culinary experience that bridges past and present is the result of an eagerness to embrace new ideas and a profound respect for tradition.

Sushi Roku’s bold and diverse menu also offers an array of hot and cold specialty appetizers and an extensive selection of exotic entrées.