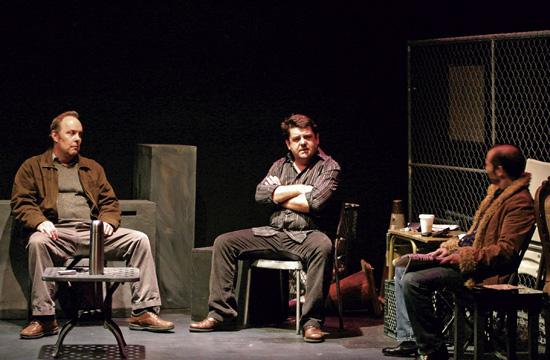 The rich literary heritage of Ireland, and Dublin in particular, is legion with such renowned writers as George Bernard Shaw, Oliver Goldsmith, James Joyce, C.S. Lewis, Bram Stocker, Jonathan Swift, Oscar Wilde, and William Butler Yeats all of whom have collectively produced some of the greatest poetry, novels, and plays ever written.

Dublin playwright Robert Massey’s brilliant “RANK,” making its American premiere at the Odyssey Theatre Ensemble, certainly continues this legendary tradition of gifted playwrights who illuminate the human condition as it applies specifically to the Irish experience. Massey’s most fascinating play is rich in sub-text, is extremely sharp, and delves into the life and times of a particular sub-set of people trying to transcend the tragedies that have befallen them. Despite the darkness of the story, Massey manages to weave that twinkling, subtle Irish humor throughout the play bringing relief to some of the adrenalin pumping both on stage and in the audience.

The gritty story takes place in Dublin and in the opening scene, we see a rather gentle taxi driver Carl Conway, extraordinarily played by Kevin Kearns, a hair trigger-tempered Jackie Farrell, brought to life by Ron Bottitta who gives an amazing, multi-layered performance, and his ne’er-do-well son Freddie, played by Jason Killalee who imbues his characterization with just the right amount of aggression, coupled with obedience and occasional displays of tenderness.

At first, the conversation appears to revolve around Carl’s weight problem, but the sub-text is so rich, and the writing so sublime, that it doesn’t take long to figure out that this is not about weight but about something much more sinister. Jackie tells Carl that he’s shocked to find out that he’s a vegetarian and grills him on “How many vegetables can a man eat?” Carl squirms and tries to be very agreeable with anything Jackie says but the truth is this is about a gambling debt of $5,000 racked up at one of Jackie’s joints.

Jackie, a seething volcano ready to erupt in a moment’s notice, doesn’t get straight to the point, and in the tradition of good old-fashion story telling, the playwright strings non-related stories together which eventually hits the gambling bulls eye on the nose. One of Jackie’s “amusing” stories, which he says has a moral to it, is about his very successful sex chat lines. He had interviewed a young woman who, as it turned out, had a bad stutter but despite that handicap, turned out to be the most successful girl he has.  “Because it takes her so long to get the words out, she keeps the men on the phone longer than any other girls.” There is an amusing exchange between Jackie and Carl during which Carl meekly corrects him and says it’s a stammer, not a stutter and demonstrates the difference. But, even as Jackie tells what appears to be an amusing story, the undercurrent is threatening and when the confused Carl asks what the moral is Jackie says: “The moral is that no matter how much you think you know someone – no one knows anything about anyone.”

The petrified widower Carl, a former math teacher who once was a good poker player but has been on a losing streak for the past six months, actually has $2,000 that he tries to give Jackie as a down payment with a promise to give him the rest of the money in a week. He also tells Jackie he’s going into Gamblers Anonymous and Weight Watchers, but that doesn’t calm the now raging Jackie. However, it looks like kindness could prevail as Jackie finally accepts the $2,000 with the caveat the rest had to be paid by that evening.  He speaks in a softer voice, adjusts Carl’s shirt and just when we think everything’s going to be ok, he viciously attacks the debtor. He wants the rest of the money by the end of the day or else it’s that old baseball bat or worse.

We now meet George Kelly, masterfully portrayed by David Schaal. He is a disgruntled taxi driver sitting around the Dublin airport with his co-worker Bush, wonderfully played by Karl Maschek who brings a slightly lighter touch to the heavier tone of the narrative. George is generally pissed off about a lot of things, especially that the Esso petrol station has gone self-service which he finds appalling. He makes such a fuss, that he is banned from the gas station which he has been frequenting for thirty years. He decides that he should burn it down, but Bush talks him out of it saying it would probably destroy everything else around it, which George doesn’t think is such a bad idea.

A very upset Carl joins his two friends, who likewise comment on his weight problem, with Bush labeling him “The world’s fattest vegetarian.” It turns out Carl was married to George’s daughter who died so there is a bond between them. George probes to see why Carl is so upset and Carl eventually confesses that in addition to the immediate gambling debt, he owes a total of $30,000. George and Bush chip in and pool their money for a partial payment to try to save Carl from a severe beating and off the three of them go to see Jackie where George is going to try to reason with him.

The meeting with Jackie does take place where accusations fly, secrets are revealed, vulnerabilities surface, even Jackie’s, and a ominous plot is hatched which promises to wipe out Carl’s debt. George and Carl are to pick up a package that they are not allowed to open under any circumstances and return it to Jackie. This has something to with Freddie’s incompetence and the ensuing events are most intriguing with surprising plot twists, but that’s all I’m prepared to reveal lest I become a spoiler.

Under internationally renowned director Wilson Milam’s extraordinary direction, the staging is perfect with the action moving quickly without stepping on any of the mercurial emotional transitions these characters experience. The play was clearly in the hands of a skilled master. “RANK” is a really exciting, entertaining evening of theatre performed by a gifted acting ensemble and should definitely be Broadway-bound.