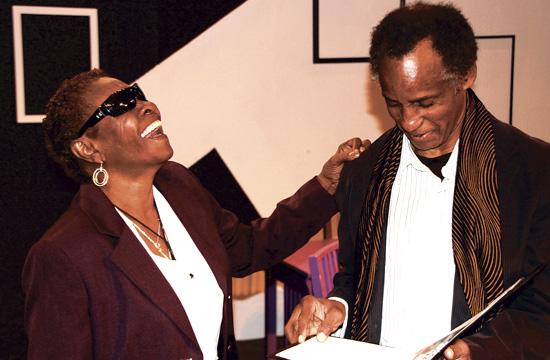 The owner of a failing jazz club seeks to save what her grandfather built, inspiring those around her to chase their dreams.

Twelve visually impaired actors and musicians will take the stage at the Promenade Playhouse in “Yesterday’s” starting today, April 18.

The production is an original comedy created and performed by Theatre by the Blind, the country’s only theater troupe composed entirely of blind actors.

In “Yesterday’s,” Candy is the owner of a failing Hollywood nightclub and tries to keep her business afloat by enlisting help from a gaggle of offbeat employees, including aspiring lounge singer Michael Quinn.

When her plan fails, Michael finds an unlikely mentor in a blind street performer. Will Candy be able to save her beloved club? Or will “Yesterday’s” be here today and gone tomorrow?

Blind in his right eye, Shane, who is also co-founder and artistic director of CRE Outreach, has a personal connection and sensitivity to the challenges faced by his company of visually impaired actors.

“It’s critical that these actors learn to trust one another and work together as a true ensemble,” Shane said. “They have to learn to navigate the stage and hit their marks using textured surfaces. Many of them lack self confidence, so we help them let go of their fears and train them to project.”

Cookie, who stars in the role of Candy, lost her eyesight as the result of domestic abuse. Initially scared of the world and trapped by her darkness, Theatre by the Blind has helped Cookie to face her fears, push past her limits, maneuver around the stage freely and find her voice.

Arnette Coates, who plays Shreik, has been a member of Theatre by the Blind for eight years and has appeared in past productions of “Revelations,” “Our Stories,” “Al a Carte Cafe,” “IDK,” “Hiding Eyes,” “Lights Out,” “Seeing Rain,” “Decider,” and “Private Eyes.”

“Theatre by the Blind has changed my life in so many ways,” Coates said. “It has given me confidence and has empowered me to see my disability as a strength rather than as a weakness.”

Sean Gorecki takes on the role of Michael Quinn, his theatrical stage debut.

“Acting allows me to escape from my daily life and become someone else. I love the challenge of stepping into a role,” Gorecki said.

Melanie Hernandez plays Cynthia. She has appeared in previous Theatre by the Blind productions, including “Hiding Eyes,” “Lights Out,” “Seeing Rain,” “Decider,” and “Private Eyes.”

“Being part of this company has helped me become more patient, concentrate more and become a better listener,” Hernandez said. “The most challenging part of theater is learning the lines and paying attention to who I follow in the script.”

“Yesterday’s” opens on Friday, April 19, with performances on Fridays and Saturdays at 8 pm and Sundays at 3 pm through May 5.

There will be one preview on Thursday, April 18 at 8 pm.

Tickets are $20, with one pay-what-you-can performance on Sunday, April 21; tickets to the preview performance are $10.

For reservations and information, call 310.902.8220 or visit www.creoutreach.org.