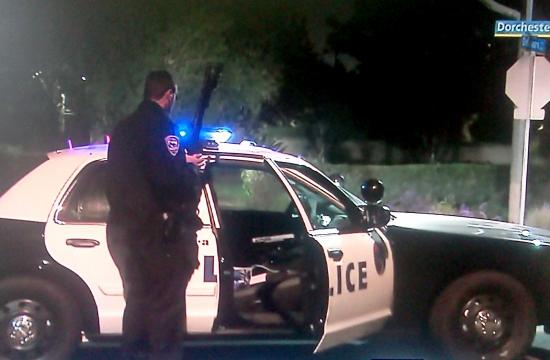 Two out of three men who broke into Tala Jewelry on Montana Avenue in Santa Monica with a sledgehammer Sunday afternoon were arrested within hours of the burglary that occurred just before 5 pm. One suspect remains at large.

SMPD Sgt. Richard Lewis said officers received a 911 call from a witness who advised that three male African American subjects had just entered the jewelry shop at 1302 Montana Avenue with a sledgehammer and could be seen smashing display cases inside.

While officers were responding, Lewis said the suspects fled in a white Dodge Charger.

Lewis said two perimeters were established and at approximately 6:30 pm the first suspect was located and taken into custody by a K9 search team hiding in a residential garage located in the 2000 block of Centinela.

At approximately 7:30 pm a second suspect was taken into custody by a search team from the same location.

The perimeters remained in place and multiple teams conducted searches throughout the perimeters until approximately 3 am. The third suspect is outstanding at this time.

Lewis said the suspects had entered the store while displaying at least one handgun and a sledgehammer.

“The suspects broke into numerous display cases and fled with an undetermined amount of property (jewelry),” he said. “Forensic personnel responded and processed the jewelry store, the abandoned vehicle and the residential garage where two of the three suspects were hiding.”

Lewis said the incident is still active and under investigation at this time.

Suspect one has been identified as Darveyon Terrell Davis, 24, of Reno, NV. He has been charged with kidnapping, robbery, “resist, obstruct, delay officers,” and conspiracy to commit a crime. Bail was set at $1 million.

Suspect two has been identified as Delina Frank Banks, 24, of Reno, NV. He has been charged with kidnapping, robbery, and conspiracy to commit a crime. Bail was set at $1 million.