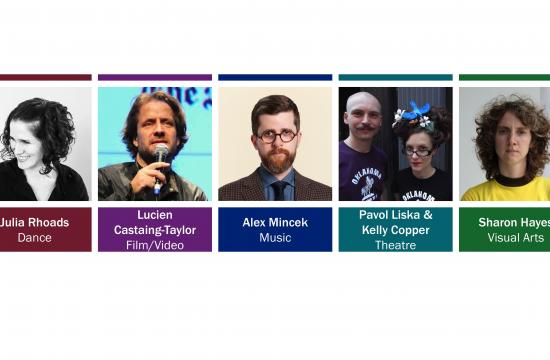 The Herb Alpert Foundation and California Institute of the Arts (CalArts) awarded the 19th annual Alpert Award in the Arts to six exceptional mid-career artists on Friday.

The award, a prize of $75,000, recognizes past performance and future promise to artists working in Dance, Film/Video, Music, Theatre and Visual Arts.

Herb Alpert, the legendary musician and artist who created the Herb Alpert Foundation with his wife Lani Hall and gave the first Alpert Award in the Arts in 1995, says, “All of this year’s winners represent the essence of the Alpert Award. They take aesthetic, intellectual and political risks, and challenge worn-out conventions. They’re unafraid of the unknown.”

Irene Borger, Director of the Alpert Award in the Arts, describes why each of the 2013 artists was chosen.

“The Film/Video panel selected anthropologist, artist, and filmmaker Lucien Castaing–Taylor, for his visceral, emotionally engaging, aesthetically rigorous, and spiritually moving work, and for his defiance of genre categorization through documenting our world with a spirit of experimentation and adventure.”

“The Theatre panel is honoring co-directors Kelly Copper and Pavol Liska for the scale of their theatrical ambition, their aesthetic innovation, and the way they systematically challenge and reinvent their artistic identity with each project. They admire the joyful play, formal rigor, and transcendence that marks Nature Theater of Oklahoma’s work.”

“Artist and performer Sharon Hayes was named the winner of the Visual Arts prize for the way her collaborative processes embody the Alpert Award’s dedication to engagement and generosity. Her commitment to giving voice to others, and reflections on the nature of history, and the power of public voice are provocative and timely.”

“Composer and saxophonist Alex Mincek was honored with the Music Award for creating a sound world at once original and informed, for his searching spirit combined with solid accomplishment, and, with his fresh and diverse mix of influences, creating a musical space relevant to the moment.”

“Julia Rhoads, choreographer, director, performer, is being recognized by the Dance panel for the unique hybrid of theater and post–modern dance, and mesmerizing, thought–provoking, full–throttle dancing made in service of witty and engaging works that confront issues of gender, violence, class, sexuality, and issues of ownership and appropriation in the digital age.”

Over the years the distinguished Alpert Award panelists have selected a group of artists who have gone on to extraordinary careers after winning the Alpert Award including Zhou Long, 2011 Pulitzer Prize winner in Music; Suzan–Lori Parks, a Pulitzer winner for Drama 2002; four MacArthur Fellows and 22 Guggenheim Fellows.