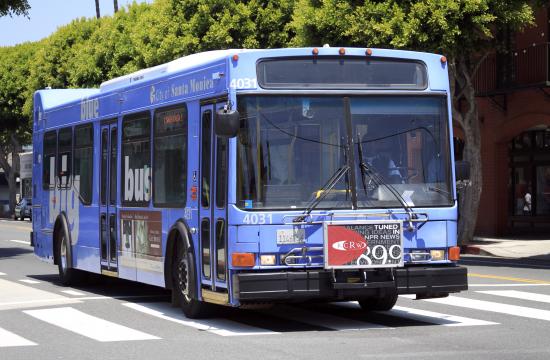 The current transit service program ends June 30; council’s renewal of Any Line, Any Time extends the program through June 30, 2014.

City Hall initiated the program in 2007 when it determined SMC “was the primary trip generator in Santa Monica.”

“Most of the 34,300 students and 1,700 staff commuted by automobile,” City staff stated. “Insufficient parking capacity at the campus led to the need for perimeter parking at the City’s beach lots and was a significant community safety and traffic concern. As a result, SMC and the City asked for Big Blue Bus’ help developing a comprehensive transportation solution.”

The college and bus system collaborated in a one-year “demonstration project” in February 2007, where SMC reimbursed BBB “for trips taken by students, faculty and staff presenting their school identification card.”

Two routes were part of the pilot program, according to City staff: Crosstown Ride the Line 6 SMC Commuter connecting Palms and Mar Vista to the college.

In March 2008, the city council approved the Any Line, Any Time program, which would be ready in time for the Fall 2008 semester.

The determined cost to SMC in 2008 was 62.5 cents, which was midway between the 50 cent youth fare and the 75 cent adult fare. It was estimated half of the riders who would take advantage of the Any Line, Any Time program would be under 21 and be eligible for the youth fare, while the other half would be 21 or older and be assessed the regular fare.

According to City staff, SMC boarding for the fiscal year-to-date through February 2013 was 1.78 million, or 12 percent more than the same period one year earlier.

“In recognition of the ridership increase the College agreed to an eight percent increase in the annual contract amount for FY 2013/14,” City staff stated.

City staff added a few service enhancements have been made to better service Any Line, Any Time users, including schedule revisions to Route 7, extension of Rapid 7 to the Wilshire-Western Metro Rail station, the use of articulated buses on Rapid 7, and launched Route 11 service connecting SMC to UCLA.