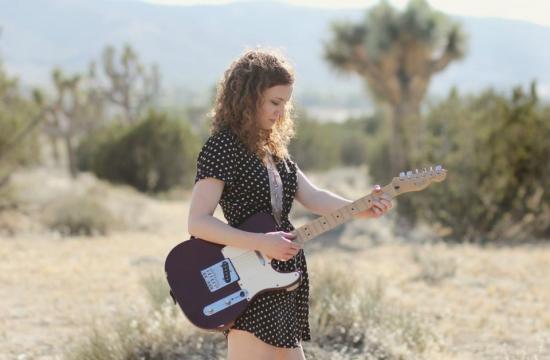 Clare Means has been singing there since 2007 .

As a singer-songwriter, she has a broad and faithful following who respect her artistry.

I first met Clare on the Promenade last year and have experienced a number of her sessions in person.

Clare took time to reflect on her start in song writing, singing and playing guitar.

Tony Morris: When did begin to take music seriously?

Clare Means: My interest in songwriting began in 2005. My sister gave me a guitar for my birthday and I started teaching myself guitar by looking up chord charts and then looking up the chords to some of my favorite songs on the Internet. Then I went through a breakup soon after I started learning guitar so it inspired me to write. Then I just started writing about everything I could think of.

Who are your favorite singers?

When did you start playing at the Third Street Promenade? How many days a week do you usually play there ?

Clare: I actually started playing a tiny bit on Third Street in 2007. I was working another job then so I didn’t come out very much in the beginning. In 2009 I started coming out on a more regular basis. Now I perform there a few nights a week. I also perform at Universal City Walk and I play affair amount of gigs too.

Where have you played in Santa Monica and the Westside?

Clare: In Santa Monica I have played at Witzend, Talking Stick, Unurban Coffeehouse, O’brien’s, the Love Shack and a few art galleries.  I also play a lot of shows in the Hollywood area at Room 5, Piano Bar and The Hotel Café.

At what recording studios did you record your albums?

Who are the Kickstarter backers?

Clare: The kickstarter backers are my generous supporters that contributed to the release of my most recent album, “War for Love.”  They are mostly people I’ve met while street performing and playing club gigs around LA and touring, and some of the backers are friends. I used social media and my e-mail list to get the word out and it worked!

Where do you write most of your songs? When you are home, coffee shops?

Clare: I write most of my songs at home for the most part. Sometimes I’ll get ideas in random places and I will jot them down until I think of the best way to work them into a meaningful song. The ideas come from everywhere, but most of writing I do playing guitar at home.

Any thoughts on songwriting and singing?

Clare: Most of my songs are about experiences I’ve been through but some songs I base on other’s experiences. It’s a fun challenge to write about other people because I get to put myself in someone else’s shoes. Also when I’m feeling writer’s block it helps to look at things that other people have been through. I’ve known a lot of interesting people in my life so far, so that has helped.

Sometimes I intend to write a song about a certain subject but then as I write it turns out to be about something completely different. That’s always fun for me! One of the things I love about songwriting is that it helps me organize my thoughts and feelings and through writing songs it helps me better understand the people and/or situation I’m writing about. Sometimes it can be a little like therapy. It’s also interesting when you write a song that feels really personal and then when people hear it you find others can relate to it too.

For more information on Clare Means go to: