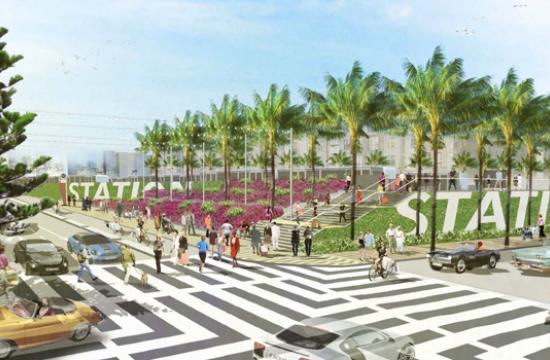 The Santa Monica City Council returns to action Tuesday with a myriad of issues to consider, ranging from tax law to mixed-use developments and from sustainability to recreation.

Council members will be considering the final designs of the Colorado Esplanade project. Proposed to be built on Colorado Avenue and Fourth Street, the Esplanade intends to be a streetscape project located at the terminus of the Expo Line and the official welcome to downtown Santa Monica for the light rail riders.

City staff estimates the Esplanade will cost $13.5 million to construct. However, City staff and council members will discuss bringing the cost down to $10.7 million by reducing the footprint of the core project.

Should Council members agree upon a supporting commercial property tax reform, that position would be made known to lobbyists, state legislators, and Gov. Jerry Brown.

Council members will also be deliberating another development agreement (DA). The latest DA proposal comes from Century West Partners, who seeks to construct a mixed-use development at 1318 Second Street. If approved in its current iteration, the development would be 45 feet high and be four stories tall.

Within the 15,000 square foot project would be 53 residential units, including 28 studios, 19 one-bedrooms, and six two-bedrooms. About 6,664 square feet would be dedicated to ground floor commercial space. The subterranean parking garage would be two levels underground and provide for 66 parking spaces.

Also, City staff will be giving council members an update on the Sustainable Water Master Plan.

Two preferential parking zones will also be discussed on the dais, as well as a resolution to support Move to Amend’s campaign to abolish corporate personhood by amending the U.S. Constitution.

On the consent calendar, Council members will be voting on the purchase of nine police motorcycles and a ride transit program for Santa Monica College students using the Big Blue Bus, among other items.