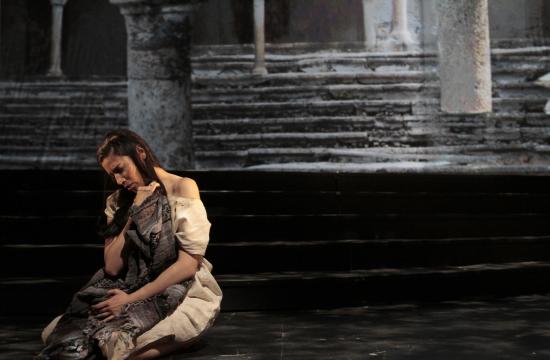 The Broad Stage in Santa Monica and L.A. Opera have joined forces to co-produce the world premiere of Dulce Rosa, which opens tonight at 7:30 pm.

The production is a fully-staged, two-act opera by composer Lee Holdridge and librettist Richard Sparks, based on the Isabel Allende short story, Una Venganza (“An Act of Vengeance”).

Dulce Rosa is a tale of romance and ruin, of revenge and redemption set in a South American country in the early 1950s.

In the aftermath of a violent political uprising, a young woman plans her revenge against the merciless guerilla who murdered her father.

Plácido Domingo, the Eli and Edythe Broad General Director of LA Opera, will conduct the production featuring the LA Opera Chorus and Orchestra.

The title role will be performed by Uruguayan soprano María Antúnez.

The set designer is Yael Pardess, with costumes by Durinda Wood, lighting by Anne Militello, and projection art created by Jenny Okun.

This is the inaugural project of the LA Opera Off Grand series, devoted to new and eclectic operatic works presented in venues away from the company’s home at the Dorothy Chandler Pavilion.

While Sparks was writing the libretto, Okun made several visits to South and Central America to gather the photographic raw material for her multi-layer artworks, which will be projected on the sets to form the world of the story.

This visual material was also valuable to Lee in the process of composing his score.

He pinned Okun’s works on the wall of his studio, alongside Durinda Wood’s research material for costumes and Yael Pardess’s set designs. All elements progressed in step as the work evolved.

Sparks wrote a first draft of Dulce Rosa between April and September 2009.

Once Holdridge began composing, Sparks and he met regularly, and the libretto went through numerous drafts as the opera took shape.

While the story structure has not changed since the initial draft, the libretto has developed substantially.

Entire lyric ideas have been replaced, arias have come and gone, and material has moved within the opera.

Performances will be held today, Saturday May 25, Tuesday May 28, Monday June 3, Thursday June 6, and Sunday June 9.

The Broad Stage is located at 1310 11th Street Santa Monica.