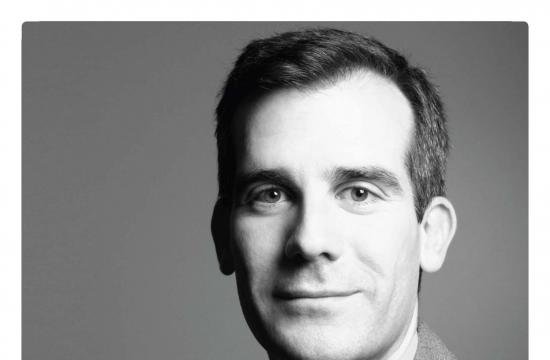 Eric Garcetti claimed the top political office in Los Angeles, as the native Angeleno defeated Wendy Greuel in the run-off mayoral race May 21.

Garcetti will be the first Jew to serve as Mayor of Los Angeles.

The election capped off a lengthy campaign that started in March 2011 and featured eight candidates running for mayor. None of the eight candidates received a majority of the vote in the March 5 general election, resulting in a May 21 runoff between the top two vote-getters: Garcetti and Greuel.

A race that appeared to come down to the wire when a Survey USA poll found Garcetti held a five point lead with a 4.2 percent margin of error, Garcetti and Greuel were in a virtual dead heat heading into Tuesday night’s election.

According to the Los Angeles Times, the 2013 mayoral race was the most expensive campaign in history, with both candidates combining to spend more than $33 million.

Had Greuel been elected, she would have been the City’s first woman mayor.

Garcetti’s father, Gil, was the Los Angeles County District Attorney from 1992 to 2000. During Gil Garcetti’s tenure as County D.A., his office oversaw the prosecution of O.J. Simpson’s murder trial in the mid-1990s.

The mayoral race was not the only item on the ballot.

Also on the ballot were three proposals possibly regulating the handful of medical marijuana dispensaries within city limits.

Proposition D proposed to limit the number of medical marijuana dispensaries within Los Angeles at 135 and raise taxes. Conversely, Proposition E proposed the same number of dispensaries but no new taxes. The third initiative, Proposition F, did not propose limitations on how many dispensaries could operate in the City but instead would have raised taxes, required employee background checks, and called for regular audits.

Had all three earned a majority of yes votes, the proposition with the highest number of votes would have been the one implemented.

Medical marijuana dispensaries were the subject of a discussion amongst Santa Monica council members in October 2012, when the panel of seven elected officials extended a moratorium on such facilities.

Also passed by Los Angeles voters was Proposition C, which allows L.A. City Hall to support the overturning of the controversial 2010 Supreme Court ruling that reduced restrictions on campaign contributions in elections. More than 235,000 voters – or 77 percent – supported the proposition.

Another issue within Santa Monica that may have an impact in Los Angeles’ City Hall is the future of Santa Monica Airport, or SMO. With the fate of SMO to be determined within the next two years, either Garcetti or one of the City’s 15 council members will likely chime in on whether the airport shall remain open in its current iteration, be trimmed down to a small operation, or shut down all together.

When Garcetti served as a council member for Los Angeles, one of his colleagues, Bill Rosendahl, was a vocal opponent of SMO.