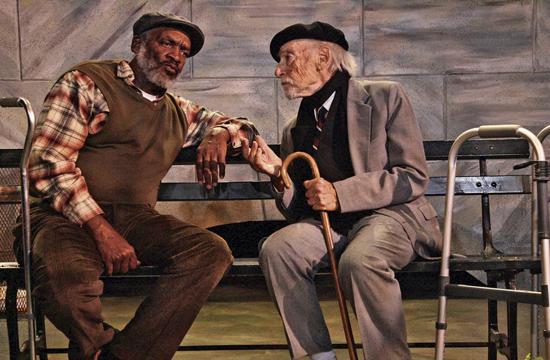 Revivals can be problematic, especially if the actors have to walk in the shoes of theatre icons like Judd Hirsch and Ben Vereen both of whom starred in the 1985 Broadway production of “I’m Not Rappaport.”

The play, which ran for 891 performances, received multiple Tony Awards for Best Play, Best Lighting Design with the Best Actor award going to Hirsch for his portrayal of Nat, a crusty old Jewish left wing former Communist who convincingly changes his identity to facilitate the solving of the current legal, medical, political, or union problem, even passing himself off as a Cuban spy.

In a tribute both to Herb Gardner’s brilliant play which, through his comically sharp dialogue, explores a myriad of social issues, especially the challenge of aging and dodging adult children who think they have your best interests at heart, not only has this play survived the passage of time, but is as relevant and hilariously funny today as it was twenty-eight years ago.

Presented by the West Coast Jewish Theatre on stage at the Pico Playhouse, the action takes place on a bench in Central Park where 81-year-old Nat, played by Jack Axelrod and Midge, played by Carl Crudup, spend their days.

Axelrod gives a riveting, tour-de-force performance as a philosopher, often citing Lenin and Karl Marx and pokes logical holes into the world he sees around him, executing his dialogue with surgical precision and crack comic timing.

Crudup also gives a wonderful performance as the sight-impaired Midge, who is somewhat irritable but at the same displays a charming naïveté that catches him off guard a number of times, as he almost believes some of Nat’s outrageous tales.  Throughout the play, these two old men thrust and parry with a dance of words done with balletic precision.

A particularly funny scene is when these two octogenarians get stoned and Midge, who has been a superintendent in a building for decades, confesses that he has never been a faithful husband and cheated even at age 76.

When Midge is faced with being fired, the irascible Nat decides to intervene on his behalf despite his bench mate’s pleas to stay out of it.

In comes the tenants’ representative Danforth, nicely played by Joe Langer, whose job it is to fire Midge and in an exquisitely laid out encounter, Danforth gets the full wrath from Nat who is now posing as a famous lawyer and ultimately cows Danforth into apologizing and backing down.

The action continues with the appearance of Nat’s daughter Clara, warmly played by Maria Spassoff, who considers her father to be “A one man reign of terror,” citing his outburst in a supermarket where he beat up some meat with his cane because he felt it was overpriced.

He chides her lack of activism and refers to her as being exiled in Great Neck and going from “Marx and Lenin to Bergdorf and Goodman.”

Out of her fear for his safety, she’s conflicted as to what to do with him, and tries to sell him on a retirement home.

He is dead set against that saying, “The only way to tell the live ones from the dead ones is how old their newspaper is.”

Nat tells her that he actually checked out a facility and attended a lecture saying, “Refreshments will be served to anyone who’s alive at the end.”

He suggests that she “wrap me up in a deck chair and ship me to Florida.”

Rounding out the terrific cast is Melissa Collins who plays Laurie, a junkie in debt to a very ominous drug dealer named “The Cowboy” for which Patrick J. Rafferty has developed a scary, but very well rounded character with nuanced behavior.

Not up to the super professional level of the rest of the ensemble is the performance given by the very young Andy Scott Harris as Gilley “the protector.”

The effective set design by Kurtis Bedford creates a lovely frame for the actors enhanced by the sound design by Bill Froggatt, who uses the distinct calliope sound heard off in the distance, further establishing the park environment.

It takes a highly skilled director to elicit powerful performances and under the sharp, incisive direction of Howard Teichman, the dialogue-heavy action moves at break-neck speed, exploring with great humor, without ever becoming pedantic, the playwright’s philosophy and social issues with a big laugh, perhaps the best way to get your message across.

Thanks to Herb Gardner’s timeless play, Teichman’s wonderful staging, and a top-notch professional cast, this latest production of “I’m Not Rappaport” is a crowd pleaser and truly a very special theatrical treat.