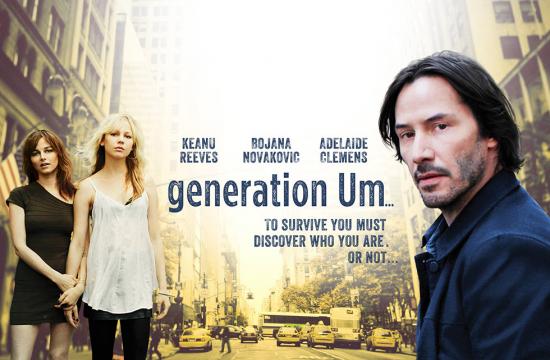 He made a name for himself in films such as “The Matrix,” “Speed,” “The Devil’s Advocate,” and “Point Break,” but Keanu Reeves returns to the big screen this week in the indie flick “generation Um,” co-starring Bojana Novakovic and Adelaide Clemens.

The film by first-time director Mark L. Mann explores the day in a life of three wandering souls living in New York City.

A plot focused on addiction, distraction, and survival, Reeves spent a few minutes chatting about “generation Um,” a film where he portrays an escort doubling as a film director.

In exploring his character with the press at a media event in Beverly Hills, Reeves also talked about his own directorial debut in “Man of Tai Chi.”

Parimal M. Rohit: Is it tough for you as an actor because there is a camera on you that you’re not supposed to be aware of, but at the same time you are playing a filmmaker?

Keanu Reeves: Yes. It was really tough. For me, it was really a great opportunity. When I was going into the project I didn’t know I’d be filming, literally, the sequences. It was a cool opportunity; I was real excited by that. In keeping with Mark (Mann)’s vision of the film, it was us learning about John through what he looks at, and also about the other characters through what he (John) looks at, and then having the characters deal with the camera. It also plays into the idea of structure … (and) perspectives. Who are we? Who do we think we are? Also, Mark was playing with the idea of a nontraditional film story form. It starts off as a mystery, which gets resolved by the end of the picture. That was one of the things, when I first read the script it had an emotional impact (with me). When I watched the movie, I was moved.

PMR: We haven’t seen you on the big screen in a while. Was the break intentional? If so, why? Also, what was it about this film you found appealing to come back?

KR: I found out about this script while I was making Henry’s Crime. The producer … showed me the script and I was, like, “this is amazing, I’d love to meet the director.” We met and got along, then went to make the film. After that, I’ve been waiting a couple years working on another movie.

PMR: Is it your movie, one that you have a hand in?

KR: Yeah! It’s called “Man of Tai Chi.” I also did a documentary called “Side By Side.” That took some time. I was also working on “47 Ronin,” which hasn’t come out yet.

KR: I would say if there were 100 lines in the film, I’d say 98 or 99 of them were scripted. Except for the last sequence at the end of the picture, during the end credits, that was completely improvised. But everything before then, I think there are a handful of lines that were improved. It’s a testament to the script and Mark’s writing, that he could write something so, quote-unquote, naturalistic.

PMR: Can you talk about your experience, as an actor, playing a director within this film? You also get to play an interviewer in this film, as opposed to being an interviewee at press events such as this one. How was that experience?

KR: John gets to ask a couple questions, but he’s dealing with some pretty wild lines. I think it’s one of those things, he has one intention and then a character, Violet (Bojana Novakovic) says, “Let’s make this a show.” John’s like, “Okay, what is your show?” He goes on an expedition investigating their apartment. For me, it was really just connecting to the character, to the movie. I didn’t really take it from a sense of “what is it like to be an interviewer or be interviewed?” It was all about taking it to John’s world.

PMR: One moment in the film, John mentions about life being a disappointment due to failures. For an actor who has had a track record of success, how hard was it to relate to a character that feels like he is a failure?

KR: Life is full of disappointments. I can completely relate to some of that.

PMR: What does John think of this “Generation Um”?

KR: I don’t think it’s the intention of the title of this film to (label) this generation.  I’m 40 in this film, Bojana’s character is in her 30s, Adelaide (Clemens) is in her 20s. So I think it’s bigger than one era. I think that was the intention.

PMR: Then what was the intention? What are we supposed to see?

PMR: In this film, John has a birthday. What was the best birthday gift you have ever received?

KR: The best birthday gift I ever received? Um, nothing comes to mind. Actually, my friends threw me a wonderful surprise party when I turned 30.

‘generation Um …’ opened in theaters May 3.