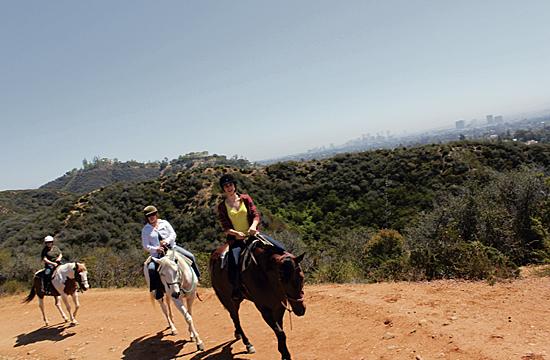 For Malibu Discovery Tours owner Ken Fasola, the park is one of the best kept local secrets, but through his company he offers two packages for locals and tourists alike to learn more about the historic location: a Sunrise Hiking Tour and a Horseback Riding and Lunch Tour.

The 3.1-mile scenic hikes run seven days a week before the park opens to the public while the horseback rides are held Tuesday through Sunday.

Fasola said he has hiked the trail more than 200 times.

“What goes along with the trail is the view points from Hollywood to Catalina,” Fasola said. “The views are often up to 120 miles and you really get a great lay of the land of Los Angeles. You can really see so much. It gives you a great perspective, especially of the Santa Monica Bay.”

The three-and-a-half hour horseback riding package starts with a VIP shuttle pick-up from anywhere in Santa Monica or the Westside.

The tour manager will provide plenty of background on Will Rogers in the 15-minute drive to the state park.

Just who is Will Rogers?

In the early 1930s, he was the most popular and highest paid actor in Hollywood.

From his start in vaudeville theater with a trick-roping act, he rose to world-wide fame as a columnist, philosopher, radio personality, and movie star.

During the 1920s, he bought land in Santa Monica, where he developed the ranch.  Eventually, Will Rogers owned 186 acres overlooking the Pacific Ocean, in what is now known as Pacific Palisades.

The ranch became the place where Rogers could relax with his family and friends, pursuing his favorite pastimes of riding and roping.

At the time of  his unexpected death in a plane crash in 1935, Rogers’ ranch consisted of a 31-room ranch house, a stable, corrals, riding ring, roping arena, polo field, golf course, and hiking trails.  When his widow, Betty, died in 1944, the ranch became a state park.

Fasola’s tour company has partnered with the Will Rogers Riding School to conduct the horseback rides.

On arrival, the riding school’s guides help tour-goers onto their horses and give a brief lesson on how to ride the horses.

After the formalities, the approximately one-hour leisurely ride along the trail begins.

The groups are kept small, usually no more than  eight people per session, so the guide can provide further history on the trail, the state park, and point out homes of celebrities such as Tom Hanks and Steven Spielberg.

Fasola said tour-goers get so much more than just the horseback ride.

“There’s so much history,” he said. “It’s amazing to go on trails where kings, presidents, and movie stars have all gone on.”

Any first-time horseback riders shouldn’t have any fears – the horses have done the trails hundreds, if not more than a thousand times.

At the peak called Inspiration Point, the guide will happily stop to snap photos of tour goers on their horses.

After the horseback riding part of the tour, there is opportunity to learn more about Will Rogers at the visitor center on the property.

The tour ends with a picnic lunch at the state park or at the Back on the Beach Café near the Annenberg Community Beach House at Santa Monica Beach.

After lunch, the VIP shuttle bus drops guests back to their pick-up locations.

For the hiking tour of Will Rogers Historic State Park, the VIP shuttle bus picks up guests at 6:45 am in Santa Monica, heads to the trail for about an hour and 15 minute hike, allows time for a quick tour of the visitor center, before dropping guests back in Santa Monica by 9 am.