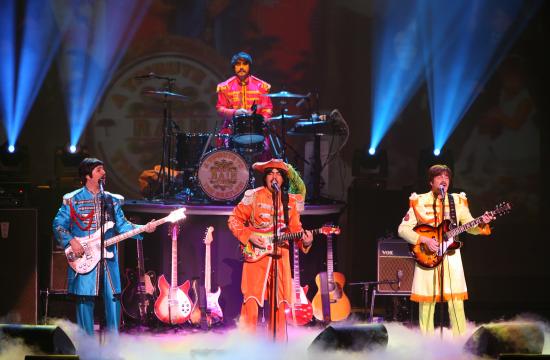 The Pantages Theatre in Hollywood opens the production of “Experience The Beatles With RAIN” tonight with shows daily through this Sunday, May 12.

The internationally-acclaimed Beatles concert has been touted as “the next best thing to seeing The Beatles.”

The concert presents the full range of The Beatles’ discography live onstage, including the most complex and challenging songs that The Beatles themselves recorded in the studio but never performed for an audience.

Together longer than The Beatles, RAIN has mastered every song, gesture, and nuance of the legendary foursome, delivering a totally live, note-for-note performance that’s as infectious as it is transporting.

From the early hits to later classics “I Want To Hold Your Hand,” “Hard Day’s Night,” “Let It Be,” “Come Together,” “Hey Jude” and more, this tribute will take you back to a time when all you needed was love, and a little help from your friends.

The story of RAIN began in the mid 1970s when keyboardist Mark Lewis joined forces with four other local musicians who together formed the band that was originally called “Reign” and played throughout the Los Angeles/Orange County area.

With their mutual love for the music of The Beatles, Reign was in demand to play Beatles music and rode an enormous wave of nostalgia for the band that had broken up in 1970.

Before long they had built a strong devoted following in and around Los Angeles. Following numerous misspellings in the media and advertising, “Reign” became RAIN (also the title of a 1966 Beatles single).

A big break came for RAIN when Dick Clark hired them to record the music for the 1979 made-for-TV movie “Birth of the Beatles.”

RAIN’s intention was not just to cover Beatle songs, but to take it to a new level.

To do songs that The Beatles had never performed live, and do them note-for-note, just like the records.

At this time, ‘tribute bands’ were non-existent.

For more than two decades, RAIN has distinguished itself by focusing on details, always being faithful to The Beatles with the ultimate goal of delivering a perfect note-for-note performance.

They have worked hard for many years, studying each song, each note, each movement and nuance – both vocally and musically.

Today, RAIN have a repertoire of more than 200 Beatles songs.

Tickets start at $25. The concert runs two hours and 20 minutes including intermission.

The Pantages Theater is located at 6233 Hollywood Boulevard, Hollywood.