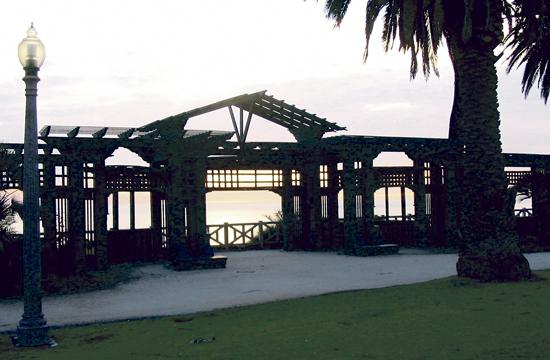 Santa Monica is having an identity crisis. This city of 80,000 plus residents is internationally known for its ethos, life style, commitment to principles of sustainability and love of art, as much as its beaches and weather.

From its beginning the City was the landscape for the creativity and imagination of the people. They built neighborhoods of wonderful bungalow houses with front porches and neighborhoods of elegant craftsman houses on wide streets planted with majestic palms.  Entrepreneurs brought their energy to the City and built the Santa Monica Pier, started the Paddleboard Races, opened restaurants, stores and businesses. It wasn’t all perfect.  The City had its seamy side and there were disasters, but overall the City thrived in the energy of its people and the natural beauty of the beaches of the Pacific Ocean and the mostly balmy weather.

The flashpoint for this is the internationally recognized and iconic Palisades Park. The park is the grand promenade of the City. A park of scenic vistas planted with specimen trees where people can find shade in a historic pergola.

Once Palisades Park was where people went to stroll, to watch the sun set over the Pacific, to picnic, or to sit on a park bench and read. In our time it became a park for joggers and is now the end point of the Los Angeles Marathon.

Recently for-profit, professional trainers decided to offer classes in Palisades Park. They brought heavy equipment, tied exercise bands to trees and made the park a more crowded and louder place. Residents were concerned and took their complaints about the fitness trainers in Palisades Park to City Hall.

The Council responded, seeing it as a matter of needing to create a citywide ordinance governing commercial fitness trainers in all parks. A proper response to the ongoing problem of sharing public open space in a City with more demand for parks and playing fields than the City can currently provide.

But the concerns being expressed are about more than the appropriate regulation of trainers in the parks. These concerns go to the heart of the identity crisis. What is being asked is: Which parts of the City’s built environment are we willing to change to accommodate the pressures of this faster pace of life and which will be kept as they are?

Palisades Park is the flashpoint because it’s a public park of significance, of memory and of history. Changing the character of the park goes to the core question of how the City Council will understand and govern given the pressures for changing the scale and the pace of the City.

At the Council hearing of April 23, Margaret Bach, representing the City Landmarks Commission, spoke about the need for “stewardship and protection of the City’s only landmarked park.”

Bach went on to say, “It is a uniquely configured park– a narrow, linear park at the edge of fragile bluffs over looking the Pacific, 14 blocks long covering more than 26 acres. A destination for locals and visitors alike, it serves as a veritable museum of the history of the city. The park’s evolution over the decades embodies its original public purpose.”

She continued, “Preserving Palisades Park for public enjoyment, prohibiting equipment that can damage the park’s many features, and clarifying the current regulation that prohibits commercial activity within the park – these three objectives constitute the most appropriate, practical and fiscally prudent approach to a regulatory structure for this world-class resource. We are counting on the city to continue to be the responsible stewards of Palisades Park. Our landmark park is unique among parks in Santa Monica. It deserves special consideration and protection.”

In writing this article I spoke with several Council members. They are rightfully proud of the parks we have. They all talked about wanting to build more parks, to make sure good parks are within walking distance of every residence, that there are more playing fields and more opportunities for people to exercise and to enjoy being outdoors.

The City is rightfully committed to supporting an active lifestyle and that includes fitness trainers and classes. Council members directed staff to negotiate a compromise regulating the commercial trainers and to prepare regulations for review.

Certainly fitness classes should follow the rules of urban politeness: share the park, protect the landscape and the furniture and buildings, clean up after themselves and in general be good citizens.

Trainers and the clients for the commercial fitness classes have participated in the crafting of the regulations and agree. The one place where there disagree is they want to continue to hold group classes in Palisades Park. They like Palisades Park best for its ease of parking, for its views and because people know it.

Stroller Strides, now called FIT4MOM, is a national franchise. According to the testimony they gave at the Council hearing it’s a great program made greater by being in Palisades Park. But why wouldn’t it be a great program at the beautiful Annenberg Community Beach House, which has great amenities, ample parking and wonderful beach views; or Airport Park or Virginia Avenue Park, which are both great spaces and have ample parking. I understand surf camps need the ocean and tennis classes need tennis courts. But fitness classes don’t “need” Palisades Park.

There are ways around this problem. Other Southern California cities run their own fitness programs, making it financially possible for many more people to participate. If the trainers want the benefit of public property maybe their fees should be regulated to be in line with the fees of Santa Monica’s other recreation programs? Or maybe there’s a better answer? Affordability is a problem the Council should consider in the context of the use of public property for private profit.

Even with good regulations and good will on all sides, when I listen to the conversation about commercial fitness trainers in Palisades Park I hear people asking that a line be drawn and that the trainers not be allowed in Palisades Park, the grandest of our parks, and that the Council recognize and honor the history, the geography, the ecology and the iconography of the park.