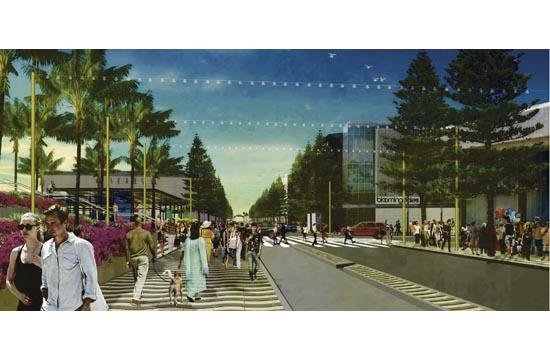 Amidst all the recent talk of proposed high rises that are too tall and a healthy dose of development agreements populating the City Council agenda, the final design plans for what is effectively Santa Monica’s welcome center – the Colorado Esplanade – were formally approved Tuesday.

The council unanimously approved only the first phase of the streetscape project located between the future terminus of the regional Expo light rail line, the Downtown, and one of the City’s most prominent landmarks, the Santa Monica Pier.

The full project is anticipated to be completed through multiple phases, contingent upon subsequent funding.

Still, both Council members and the City staff hope the Colorado Esplanade will let everyone know – especially those who come into town once the Expo Line is complete in 2016 – they are in Santa Monica.

“The final design of the Colorado Esplanade… organizes arrival/departure for drivers, bicyclists, pedestrians and bus and transit patrons, while creating a City gateway that integrates the beach, Civic Center and Downtown,” City staff stated.

City staff estimates the entire project will cost $13.7 million; the first phase approved by the council comes with a $10.7 million price tag, with $9.7 million “secured pending Council approval of the (Fiscal Year) 2013-14 … Budget in June 2013.”

“The core project includes the re-alignment of Second and Main Streets, critical infrastructure upgrades on Colorado Avenue between Ocean Avenue and 4th Street, and the connection between the future station, the Pier and the new Civic Center parks, but does not include the areas directly adjacent to the station between 4th and 5th Streets, the Gateway Triangle, or the proposed improvements for 4th Street north of Colorado,” City staff stated.

For about an hour, Council members and resident provided their respective input on the project.

Council member Bob Holbrook, for example, recalled when the California poppy could be found in Santa Monica when he was growing up here and asked City staff whether the Esplanade could feature wild plants. He also asked if City staff would consider planting Monkey Puzzle trees.

Meanwhile, Council member Ted Winterer asked about tree selection. According to the staff report, the Agathis Robusta was chosen as the primary tree to populate the Esplanade area. The Canary Island Pine and Spotted Gum trees were alternate selections.

Beyond people gazing, another issue that was brought up: the Holiday Inn on Second Street. Council member Tony Vazquez asked City staff whether they considered how the Esplanade’s plans fit in with the hotel’s future redesign. The Holiday Inn currently abuts the area where the Esplanade will reside.

A livelier wayfinding system, perhaps one where there is more than just a sign pointing in a particular direction, was the subject of Council member Gleam Davis’s questioning. Specifically, she wanted to know how people coming into Santa Monica but are not from here could be directed in a lively manner of how to get to the Promenade or the beach from the Expo from the train station.

Holbrook agreed wayfinding was important and suggested a mural be created to give people a visual of where they are and where they can go from the train. However, he did not agree the Gateway Triangle Garden was an essential element of the Esplanade.

“I’m not sold or convinced it needs to be a big gathering spot,” Holbrook said of the Gateway Triangle Garden. “My concern about that area is it would become a refuge for people who’ll just be there all day long and never leave until night. I’d rather have a garden.”

Looking forward, City staff indicated they would seek grant money to fund the remainder of the project.

The Civic Center Specific Plan was also amended as part of the vote; the amendment eliminates the Second Street Bridge Extension as a public improvement project and instead replaces it with a “planned Main to Second Street alignment proposed by the Colorado Esplanade project.”